Friday night was a looooong night in our house.  Kylah, having NEVER been struck down with gastro in her life, decided that tonight would be the night to experience her first technicolour yawn.   At approximately 11pm, she woke up and spewed all over my freshly cleaned floors.    She had no sooner finished cleaning up her first puke (I am such a terrible mother – I shouted instructions on how to clean up and disinfect the vile sludge from the other end of the house so that I did not need to go near the ‘spew zone’) when she did her second ever spew.  This continued until 2am, when she finally went to sleep.

The next few hours were torture (for me).  Do I delay the trip?  Or persevere?  On one hand, if we stayed we may spend the next week taking it in turns to vomit and then completely miss our time in London.  On the other hand, maybe she just spewed from excitement or nerves?  If it is a bug then surely it’s a BAD one to infect the one person in our house that seems to have been immune to every other bug we have ever come in contact with (meaning we are all screwed).  In the end I dosed her up on super strong anti-nausea tablets, advised her not to touch anyone or anything and marched on.  I donned my gloves and Ben’s dust mask and went about disinfecting the toilet, door knobs, taps and anything else that Kylah may have touched during her 3 hours of spewing to minimise the risk of the other kids coming into contact with a germ when they woke up.

When we left home at 6:15am she looked okay, although a little tired.  I nominated Ben to sit with Kylah and Rohan on our way to Perth.  Like the awful mother I am I was trying to keep away from her so that I did not come into contact with any germs.  Ben had felt unwell on Thursday and had had a small vomit so I decided he had infected her and should therefore be immune to whatever she had.  Rohan was doomed regardless of where he sat.  He pretty much touches every single thing there is to touch in an airport then sticks his fingers in his mouth so I am expecting him to come through the 24 hours of flying with a plethora of bugs regardless of whether he is sitting next to germy Kylah.

Apparently I made the right choice with the seating arrangements.  Ben said Rohan was a nightmare passenger.  He kept needing to get up and down, spilled everything all over himself, asked 6 million ‘what if’ questions and almost lost it when both breakfast options contained offensive ingredients (to him).

I had a lovely flight.  Jazzy took Isabelle to the toilet whenever she needed to go and they both just sat quietly.  My only complaint was that Isabelle got over her fear of flying quite quickly and kept leaning over me to peer out the window.  As I was trying to sleep I did not appreciate her hot little breath in my face and stray wisps of hair tickling my nose.

We arrived in Perth and Kylah looked shattered.  She still wasn’t well.  Rather than sit around the airport for 6 hours then catch a 17 hour flight to London we decided to break the trip up a bit for her and spend a night in Perth so she could recover.

Perth was uneventful.  Ben took Jazzy and Rohan on a long walk while Isabelle, Kylah and I slept for 14 hours straight.

Rohan is already struggling with jet lag, or should I say – meal-lag.  By the time we arrived at our hotel in Perth it was late afternoon so I decided to order some “linner” (lunch/dinner) which did not go down well with Rohan who was full of questions such as “what happened to afternoon tea?”, “Does that mean we don’t get anything to eat for the rest of the day?”, “Wait!! I don’t think I had morning tea either!!”.

This did not end there.  He woke us all at 4:30 Perth time (6:30 Brisbane time) demanding breakfast.  By the time any shops opened at 8:00am Perth time he was almost beside himself.  He had not only missed breakfast, he was now being forced to eat breakfast at morning tea time (10:00am Bris time) and was certain we were conspiring to force him to skip morning tea as well.

We made our way to the airport and boarded the plane.  I reluctantly agreed to have Rohan seated with me this time, to give poor old Ben a break.  He wasn’t too bad.  The seats have movie screens on the back of them and my only complaint was that he would shout at me (as he had headphones on and was unaware of his volume) that he needed to go to the toilet to fart every 5 seconds.  He would then explain to everyone nearby that that was the polite thing to do on a plane so that you didn’t offend other people with your smell.

I spent the flight watching Twin Peaks and made it to the end of episode 4.  After so many years I finally get what the whole “wrapped in plastic” phrase was about!!

We are now stuck in Singapore Airport for 6 hours.  I could not think of a better place to be stuck though!  Free wifi, shops galore, rest areas, day spas, play centres.  One of the terminals even has a games room.  Unfortunately for Rohan it is not our terminal and the terminal where it is located is a train ride away.  A train trip that no one, bar Rohan, wanted to make.

To cheer him up I took him on a walk and bought him a 20 minute fish foot spa.  Before we went in I swore him to secrecy and he earnestly nodded and said that ‘no one would ever find out our secret’.  The fish foot spa was ‘The best thing he has ever done!!”  The poor little fish feasted on Rohan’s feet like they had never eaten before while he squealed with delight.  He now wants to import Garra Rufa (Dr Fish) to Australia so he can have a daily foot spa.  According to him this would have multiple benefits.  He would be doing the fish a favour (by providing them with his tasty dead foot skin) and also keeping Dr Tan happy (the Dr who is always horrified to see Rohan’s dirty and injured feet).

We are now 2.5 hours away from boarding our flight to London and things are starting to fall apart.  Rohan is still super hyper from the excitement of fish feeding and the girls are so tired they are about ready to smother him to get him to shut up.  Surprisingly no one has discovered Rohan’s secret despite him coming back from our walk covered in water and grinning from ear to ear.  I think they just assumed that he spilled something on himself.

Anyway, I am super tired and am going to sign off now.  Hopefully they all manage to sleep all night on the plane and don’t make too much of a fuss. 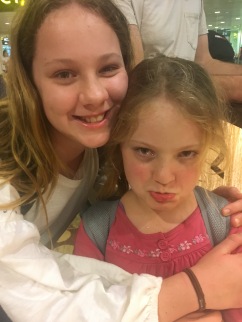 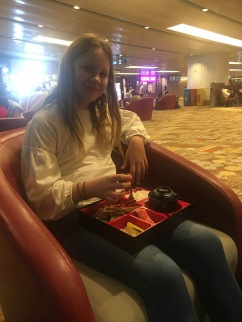