Colmar wasn’t a town randomly selected by Ben and myself but was chosen as a place to visit on recommendation from our French friends, Constance and Baptise.  Constance had described it as looking like the little village in the beginning scene of Beauty and the Beast, which delighted all my Disney-loving offspring.

During the journey from Bragny to Colmar I decided to do a bit of Google “research” on the town of Colmar and what makes it so special.  The following is a synopsis of what I read and as it is being written the day after I read it, it may or may not be completely accurate, but then again, things read on the internet are rarely accurate.

Colmar was first mentioned in a text in the 9th century when it was briefly governed by a Carolingian Emperor named “Charles the Fat”.  This isn’t a modern nickname given to him but a name that is documented in historical records.  No one can say conclusively whether or not Charles was fat (although his nickname is quite a huge indicator) but they did say he was regarded as largely inept and lethargic (probably another indicator).  Historical records also reveal that Charles the Fat did put an entire town on a diet.  There is no record if he himself also participated in this diet or what the diet entailed.  If I could only somehow come up with a way of discovering his “diet” I might be able to market it as the next big thing.  “Paleo” is getting really old and “Diet of Charles the Fat” has a nice ring to it.

After Charles the Fat died it seemed that Colmar, being on the border of France, Switzerland and Germany was a source of much debate over which country it actually belonged to.  Over the next couple of thousand years it continually switched from being a part of Germany to a part of France, to a part of Switzerland.  Even in the 20th Century it went from being a part of Germany, to a part of France in 1919, then was taken back by Germany in 1940 then reverted back to France in 1944 where it has remained ever since.  Not sure if the poor inhabitants had to learn multiple languages although I did read somewhere that their main language at one point was Alsatian.  It is part of the Alsace region which is renowned for wine and more interestingly to me, the Alsatian dog.  The Alsatian dog, now known as a German Shepherd, is one of my favourite dogs and we are the proud owners of the worlds most beautiful German Shepherd, Lana.

Because Colmar was the source of a 1200 year old custody battle, the town itself is a mixture of German, Swiss and French architecture.  After regaining control whichever country was in charge decided to decorate a bit in order to give it a bit of their own country’s charm and flavour.  The result is a town that is spectacularly beautiful, absolutely beyond belief.  It was also spared from being damaged during all the wars that happened around it (French revolution, WW1 and WW2 etc).  Honestly I have never seen anything like it.  I really wish we could have spent a lot longer than 1 night there.

We arrived in the afternoon and walked the 2.6km in to town to check out the beautiful buildings and perhaps visit a pub or two to check out the footy (soccer).  Colmar felt like a bit of a ghost town because every single resident was jam packed into the pubs cheering loudly at the football and letting off firecrackers and various other noise blowing instruments.

It was raining on our walk which terrified the bejesus out of Isabelle, who is scared of raining and storms.  The loud noises, fire crackers and noise makers also upset other members of our troop, who are sensitive to crowds, deafening noises and fireworks.  It was quite a surreal experience, being surrounded by such misery and utter elation.

I wanted to throw myself into the nearest pub and jump on the happy bandwagon but being the responsible parent that I am (also killjoys objected to that suggestion) I joined my miserable brood and went to observe the stunning sights of Colmar.

The buildings are painted a multitude of colours but not in a tacky way but in a breathtaking way.  As is common in France there are flowers EVERYWHERE.  Honestly, I think the richest people in France must be either florists, flower shop owners or horticulturalists.  Their opposition to ‘visual pollution’ is evident everywhere.  They don’t seem to mind invisible pollution in the form of second hand smoke though.  Everywhere we went there were French people smoking up a storm.  I’m not quite sure whether the memo that “smoking kills” was never translated into French or whether they just don’t give a damn but it certainly seemed to me to still be the done thing in France.  Kind of like how Australia was in the 90’s.

There is a little river that runs through Colmar called “Little Venice”.  It is so pretty I now feel like I can skip going to actual Venice as surely it can’t be any better than what I have already seen.  The pictures below really do not do justice to this storybook town we walked around.

After the footy had ended and France had won, the French in Colmar absolutely went off!! There was mayhem on the streets as everyone was cheering and doing highly dangerous things like riding on the roof of cars, parading on the back of ute’s, cheering, screaming and letting off fireworks without any regard to personal welfare or safe practices involving fire crackers.  It is a miracle that no one was injured.  I was super jealous of all the joy and that I was not a part of it.  I tried hard to think of a time that I was ever that happy or excited in a big group like that.  I’ve been pretty excited on my own during shopping expeditions when I found certain discounted items I’d been eyeing off.  I’ve been excited during concerts (Counting Crows, Eminem, Savage Garden and Pink – the extent of my concert experiences) but nothing like this.  Actually I did get pretty excited this morning when in a German supermarket I discovered blocks of OVALTINE chocolate!!  I stupidly only bought 2 blocks then, when I realised how delicious it was, demanded Ben drive us back to Germany to get more (he denied my request).  Luckily for all the recipients of my souvenir purchases, Switzerland also sells Ovaltine chocolate so I was able to buy the entire supply of Ovaltine Chocolate bars at the servo where we fuelled up.

Back to Colmar and the footy.  After viewing a church that was built in the 1200’s (fricken mind-blowing to me!!) we took refuge from the celebration’s in a restaurant called L’Amandine where Ben was able to eat what he declared to be “The best pizza he has EVER eaten”.  This is a big call.  Ben likes pizza and sampled pizza’s from many restaurants.  The restaurant was quite quiet except for one child who had a horn and kept blasting it enthusiastically and cheering.  My lot shot death stares at this poor little boy and kept saying things like “Can’t they celebrate quietly??”.  I tried to explain how awesome it was that we were in France on this momentous night but my kiddo’s (except Rohan who was as eager as I was to jump in amongst all the shenanigans and celebrations) could not care less.

After a massive dinner we decided to walk the 2.6km back to our Airbnb apartment.  It was pouring rain and halfway through the walk home Isabelle and Jasmine decided enough was enough.  Jazzy’s feet were hurting and Isabelle was so busting for the toilet that she had invoked the “wee wee” walk (the walk you need to do when pelvic muscles alone is not sufficient and you also have to use your thigh muscles to stop the flow of urine).  I decided enough was enough and encouraged Ben to jog back and get the car while I waited with the two misery gutzes.  Rohan and Kylah jogged with him while I enjoyed watching the passing Frenchies sing their national anthem out of tune, blow their horns and squeal with delight.  I imagine that they looked at Isabelle and Jasmine and assumed they were from Croatia based on their gloomy demeanour.

Ben finally picked us up and drove us back to our house, which was modern, spotlessly clean and comfortable.  Showers were had, teeth were brushed and then we all went to bed, ready for a big day of driving the following morning (which is now today).

If you ever go to France, skip Paris – Colmar is the place to be.  My absolute favourite place so far. 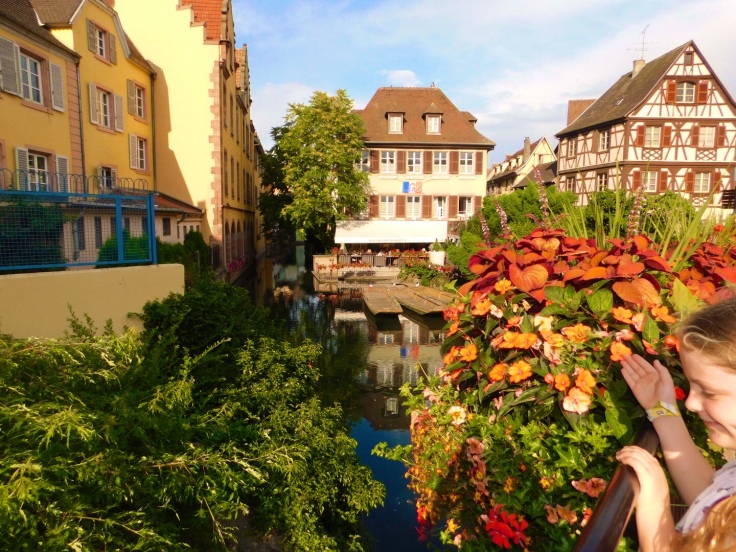 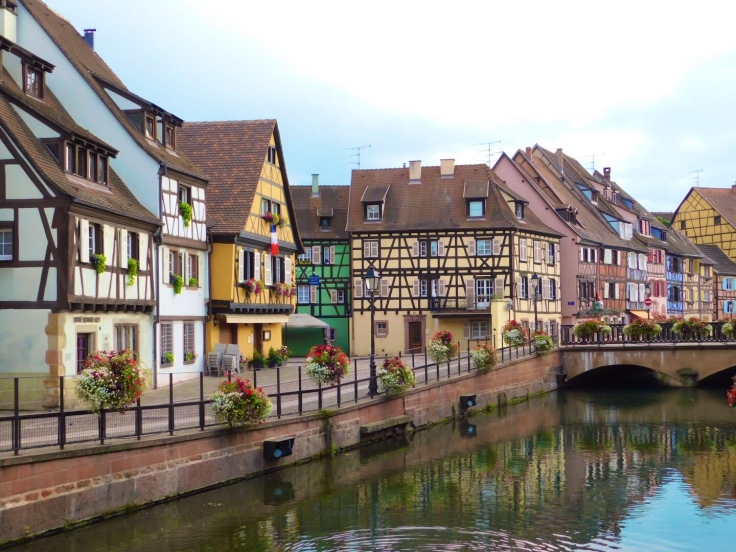 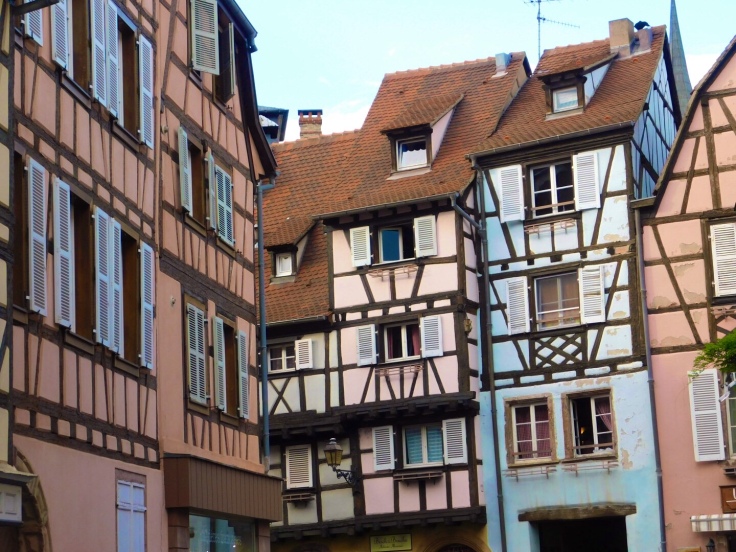 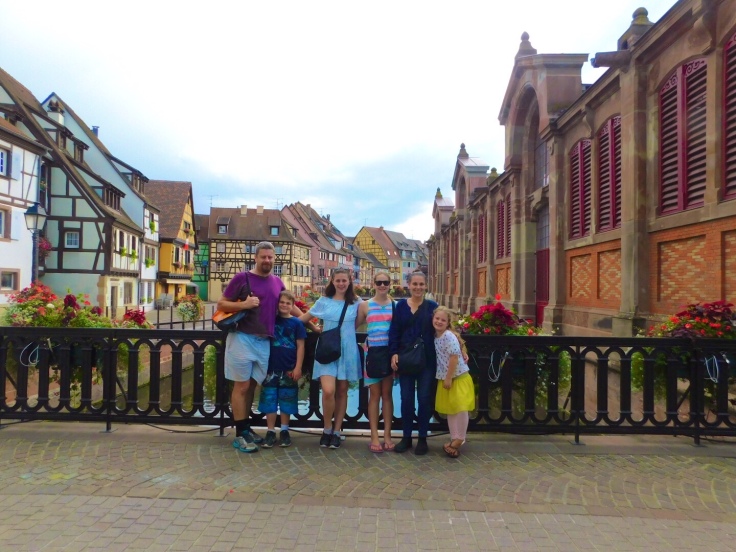