This morning started like every other morning, with Rohan and Isabelle waking everyone at an obscene hour and being shouted at to be quiet.

Luckily Ben took the kids on a walk and I continued slumbering until a more reasonable hour before being rudely awoken and forced to hurriedly write my blog.

We set of on foot for an expedition to experience all of London’s beauty.  First stop was Westminster Abbey.  Upon arrival at “Westminster Abbey” I said to Ben “this isn’t Westminster Abbey!!  This is Parliament House!!”.  “No it isn’t.” said Ben in his very I-am-right-everyone-else-is-wrong tone.  It isn’t often that I am certain of something, but when I am there is no backing down.  The back and forth bickering continued for approximately 2 minutes before the children suggested an idea.  If mummy was right, then we would be all entitled to 1 ice-cream.  If Daddy was right, then they would lose an entitlement to an ice-cream.  The kids approached one of the policemen on duty and quizzed them on the name of the grand location we were standing in.  “Parliament House” was their response which was met by a chorus of cheers from my children and a promise to bring the policemen back an ice-cream as well.

We spent some time marvelling at Parliament House before moving on to marvel at Westminster Abbey, along with 150,000 other tourists, who were also marvelling at these architectural wonders.  It isn’t just these famous landmarks that you marvel at though.  EVERY building in London is full of charm and old world character.  I just love moseying along the streets looking at all the old buildings and wondering about their history.  It really is such a picturesque city.

We then headed over the River Thames (which I have learned is not pronounced phonetically but instead is called the River Tems – not sure how that came about) so I could take the kidlets on a quick walk past Southbank and up to London Bridge so we could have lunch at the Borough Markets, which is apparently a foodie heaven.  The quick walk was actually about 3.5km and was peppered with complaints about being thirsty/hungry/needing-a-toilet so felt like a marathon.  En route we happened upon the “Clinks Museum” which is a museum of the old English gaol.  The kids were desperate to go in (bar Isabelle who was terrified of going in) so Ben and I happily obliged.

The museum was awesome.  So interesting.  But unfortunately my ancestors were a barbaric bunch of arseholes and the museum detailed the gruesome and unjust ways that their prisoners were tortured.  This was complete with various frightful and horrific displays of severed heads on sticks and various other unpleasant displays.  Isabelle had to be carried in (kicking and screaming) but eventually calmed down.  Good old Rohan would go ahead and inspect each room then come back and advise whether we needed to put a shirt over her head and run through, or weather he thought she could possibly be distracted by a fake rat for a period of time.  Bless his little soul, he even went in and blocked the view of certain things from her.

Rohan, Ben and I were fascinated with the history but unfortunately the museum left Kylah, Jazzy and Isabelle feeling a tad bit traumatised.  The woman at the door, whom we had specifically asked if it was suitable for children had responded with “It’s just like Horrible Histories, you know – the kids show”.  I think this may have been a tad of an exaggeration and I’m not sure that comparison is quite right.  If you have sensitive kids I would definitely give this museum a miss.

After the museum we trudged onwards on what I promised was only a very short distance to Borough Markets.  On the way Isabelle’s legs stopped working requiring her to piggy backed and we had to refill drink bottles and find toilets at least twice.  We saw Shakespeare’s Globe Theatre and took pictures of beautiful buildings that we saw everywhere.  I will add a few at the end of this blog but will try not to bore you all with ALL my photos.

The markets were great but ever so busy.  Kids were promised that they could eat whatever they liked and so 3/4 of them chose a dessert food for lunch.  I then went off in search for some proper lunch food and happened across a fish and chip store with the declamation that it is “Winner of the Best Fish & Chips Award” in the whole of England.  Of course we all know that when I am presented with such a claim I feel compelled to test it out to determine the legitimacy of their proclamation.  The fish and chips were good.  Bloody good actually.  I had bought Ben a soft shell crab burger and he declared it to be “pretty bloody good”.  At the time I didn’t think it was too expensive but this morning when Ben was doing his daily ‘spending check’ he saw that it had cost $90AU for fish and chips and let out a horrified yelp.  To be fair, it was only roughly 45 pounds, which I thought was pretty cheap for all the food we got.  But I keep forgetting to double the price to convert to AU.  (The shop was called Fish Kitchen – if anyone is interested in their soft crab burger)

Lunch was eaten away from the markets because it was so noisy and then we trudged on towards the tower bridge so we could pose for obligatory photos and then cross it.  Across from the bridge we viewed the outside of the Tower of London, which made me desperate to see the inside of it.  Unfortunately I’m not sure we are going to have time but I will definitely try to squeeze it in.

After the Tower of London we made our way to Trafalgar Square and had an ice-cream in-transit.  There was tiny mobile ice-cream shop that sold lemon ice-cream which was the best ice-cream I think I’ve ever tasted.  If we go back that way I will definitely get the blokes name as he was telling us he has been selling ice-cream there for 40 years and makes it himself.

We walked through Trafalgar Square, took some photos and then the kids hit a wall.  They were absolutely knackered beyond belief.  I suggested that Ben walk them home and I make my way to a Tesco Superstore (Woolies equivalent, although a miniature version) to pick up some supplies.  The Superstore was only 1km away but in the opposite direction.  All the little food shops near us are tiny and don’t have the range of things that we needed.  For starters, the two stores near us don’t sell sunscreen (WTF???), kids NEEDED Vegemite and also I wanted to pick up some fresh fruit, vegetables and meat so I could cook dinner at the apartment tonight.

Kids and Ben headed one way and I skipped off the other way, enjoying the Broadway strip and all the picturesque buildings on my way to the store.  When I arrived at the Tesco “Superstore” I found it to be slightly smaller than a regular convenience store in Australia but it still had a pretty good range.  I only wanted to buy a few things, as I had to carry them 2.8km home but unluckily for me, Tesco do not sell individual fruit and veggies.  So rather than buying 2 carrots, 1 onion, 1 zucchini and 1 capsicum for my spaghetti bol, I needed to buy a kg of each.  This was on top of bread, sunscreen, butter, mince, wine, heaps of fruits (all in 1kg bags) and snacks.  Alas, there was no Vegemite.

Like the trooper that I am I started out on my way home somewhat cheerfully thinking that I could definitely make it the 2.8km loaded up with groceries.  I made it 1.3km before I came to understand what Isabelle means when she tells us that “her legs have stopped working”.  I plonked myself down in St James’s Park and sent an SOS message to Ben.  St James’s Park was an awesome spot for my legs to stop working as it is stunningly beautiful.  I sat in a beautiful grassy spot in the shade and enjoyed the scenery while I picked at the various grapes and blueberries that I had bought.

After my rescue we returned home to find a house that was sweltering hot and full of children that were practically comatose on their beds.  We had walked them 15km.  It was only 5pm and the thought of cooking in the heat was very unappealing so instead I decided to take our washing to the nearby laundromat and then go to the pub while it was washing.  By this stage my friend Amy had arrived so we went together.

Guess how much it cost us to do a load of washing???  NINE POUNDS!!!!  Then a further SIX POUNDS for the dryer ($30AU for 1 load of washing)!!!!  Ben’s bright idea of only bringing 4 sets of clothes for himself is going to cost us a fortune!!  I said to him he may be better off just continually buying new clothes, rather than washing every 4 days.

Ben joined Amy and I at the pub across the road from our apartment.  We stood outside so we could see straight in and keep an eye on what Isabelle (who was the last man standing – all the others were dead to the world by 6pm) hanging out the window shouting questions to us.

Watching the footy (soccer) at the pub was an awesome experience.  People over here really get into their sports in a way that is reminiscent of AFL enthusiasts barking threats and swearing at refs in Australian games.  We briefly returned to the apartment so I could at least pretend to parent a bit.  Isabelle had prepared dinner for us, which consisted of grapes, blueberries and strawberries sitting in a pot of water.  Amy and I helped her cook some Spag Bol and then woofed it down before abandoning ship to return to the pub.  Good old Benjabum stayed home to put Isabelle to bed then himself to bed.

Amy and I stayed at the pub chatting until they called last drinks – reminiscing, catching up and making plans.  I didn’t get to bed until midnight and then was woken this morning by children who, having gone to bed at 6pm last night woke up at about 5am.

Today we are heading off on another big day of exploring so I’m sure I’ll have a lot to post about tomorrow.  I am already feeling extremely fatigued and exhausted and it’s not even 9am so my tolerance levels for whinging kids is likely to be extremely low and our day may or may not be filled with me grumbling at children and insisting on catching trains, rather than walk. 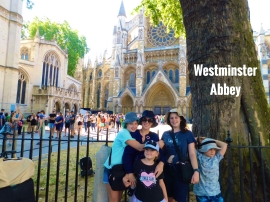 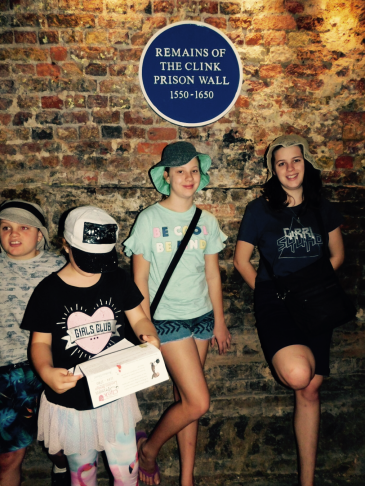 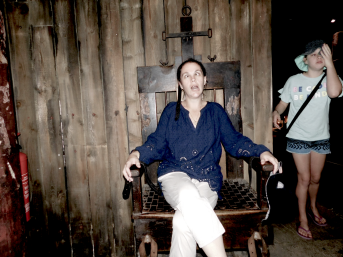 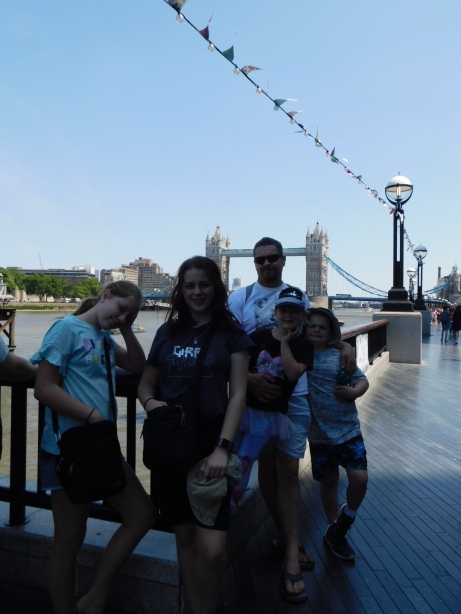 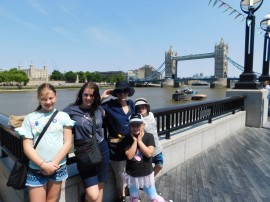 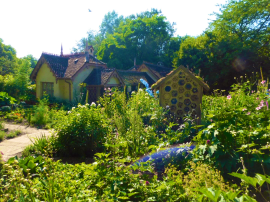 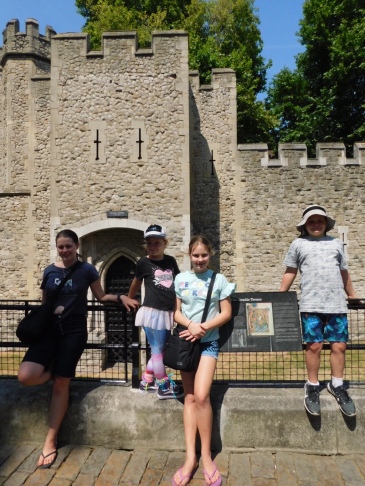 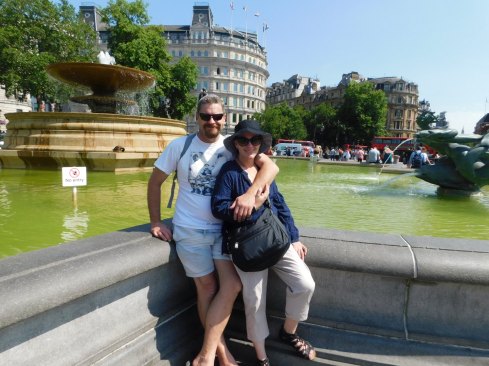 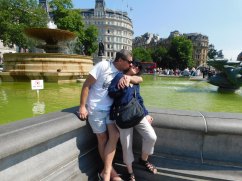 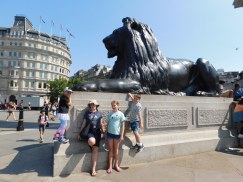 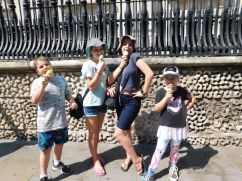 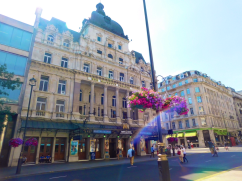 4 thoughts on “Day 2 in London – discovering London’s history – on foot.”