Today has been another HUGE day. We decided to go to Versailles because I had heard about how amazing it is and I also wanted to learn a bit about French History (I know nothing… seriously nothing).

Reviews from various websites recommended that I pre-purchase tickets that allowed me to skip the queue – so that’s exactly what I had done.  3 weeks ago, from the safety of my office in Australia, I purchased tickets to Versailles for today so we would not have to line up with 60 000 other tourists.

Getting Versailles was a challenge.  It is a miracle each day that Rohan hasn’t ended up being run over by a car.  Paris uses zebra crossings with the addition of the red man/ green man light.  In Australia a green man combined with beeps means that you can cross the road safely.  In Paris, a green man seems to indicate the start of a game of chicken between you and the cars.  If you don’t start walking, straight out in front of them as they are still approaching, then they will not stop.  Rohan thrives on a good game of chicken and throws himself onto the road as soon as the little man turns green while the rest of us scaredy cats scream at him in terror.  It is very confusing.  Zebra crossings without the red man/ green man light I’m assuming are just like regular Australian zebra crossings.  Except in Australia, you wait patiently till the car sees you on the side of the crossing and stops.  In Paris, you could be standing at the side of a zebra crossing for a month of Sunday’s before anyone bothers to stop.

The train station was another debacle.  I had been given good information that it is best to buy 10 individual paper tickets rather than 1 day passes.  These paper tickets are good for 4 different lines within Paris.  As we were going outside of Paris we needed another type of ticket which required us to use a ticket machine.  Unfortunately for us the ticket machine did not take notes and you could only pay with coins (24 euro coins to be exact) or a visa card.  We attempted to use all our visa cards but were rejected every time.  Seems some of the ticket machines do not like international visas.  It took us about an hour in the train station to figure out how and where to get tickets from.  “Parlez vous anglais” has been my most used phrase so far this trip, along with “pardon” every time Rohan does something he shouldn’t do.

We eventually made our way on to the train and arrived near Château de Versailles.  As we were hopping off the train a French lady stopped us and in a panicked voice issued a dire warning about pick pockets.  We had also heard warnings on the train about being aware of pick pockets.  I felt like I was back in the 1800’s.  I didn’t realise pick pocketing was still a thing.  I thought the Brits exported all us pick pockets to Australia in the 1800’s where we had no pockets to pick and the art of picking pockets subsequently died out.

Despite being super aware of anyone coming close to us, we had no encounters with any pocket pickers.  I surmised that perhaps they looked at dishevelled Rohan (who accidentally wore a dirty shirt out today and I hadn’t realised until we were already on our way) and assumed that we too were poor and would have nothing worthy in our pockets.  In any case, the amount of crime I’ve heard about in Paris surprises me.  There is security everywhere and people keep warning us about scammers.  Twice we have seen army folk walking past carrying full automatic weapons.  Not in the holster, but in their arms – ready to fire.  It’s a bit unnerving.  I wonder why Paris has a lot of unlawful citizens wandering around???

Château de Versailles was spectacular.  My ‘skip the queue’ ticket did indeed allow us to skip the queue for purchasing a ticket.  It was about 3 people long.  However, it did not allow us to skip the queue for entry in to the palace, which was about 3 miles long and wound around like a snake.  It took us nearly 2 hours in the scorching heat before we reached the entrance.  I marched up to the front of the queue with a couple of other angry Americans and yelled about how my ticket said “direct entrance”.  The poor employee at the front of the 2 hour long queue told us to take it up with the ticket provider that we had bought it through and that the only true ‘skip the line’ tickets are purchased directly from the Versailles website.

I was determined to stay in the queue, despite the protests of my other group members that they were hot/thirsty/hungry/needed-a-toilet.  Ben graciously took them off in search of a toilet while I waited in the queue and clutched my bag tightly.

Some of my tribe do not cope well in crowds of people so it was a feat of nature that everyone made it to the entrance in one piece.  Unfortunately, once inside you had to queue to get your audio set and then march through the palace in one big queue.  It was so jam packed you could barely breathe and their were no exit signs anywhere.  It is quite a hazard I think. I shudder to think what would have happened if some kind of alarm went off – there would have been a stampede!!! They had waaay too many people in the palace – 10 million visitors per year they get & I reckon 1% of them were there that day. Ben thought this was an exaggeration & that there would not have been 100,000 people there. “Ben,” I retorted “I’ve been to an Adele concert. I KNOW what 100,000 people looks like.”

Rather than enjoy the art and the opulence I was constantly doing head counts and making sure the member of my group, who does not do well in crowds, had not broken down.

I actually didn’t learn anything about French history on my visit to the palace but if I had to hazard a guess, I would say that the royals were overthrown because they spent an exorbitant amount on luxury items.  Honestly, I’ve never seen such works of art and brutal displays of wealth.  Painted ceilings, chandeliers, marble and gold everywhere – and all of this was done in the 1600’s when I imagine it was a lot more difficult to do.  If I was a poor starving Parisian back in 1650 and the royals were spending my tax money on pampering themselves to the extreme I’d revolt too!  It was incredible.  An absolutely splendid example of history and wealth.

We caught the long train ride back to our station ‘Nation Station’ and as soon as I got off the train I started to relax.  The 11th district, where we are staying, isn’t very touristy and I have found it to have a more relaxed, friendly and less busy vibe.  Ben took the kids up to the apartment for dinner while I focused on finding dinner.

Despite going to about 10 cafes, I could not find anything to eat as I could not understand the menus.  I ended up coming back up to our apartment and ordering uber-eats.  It took me an hour to plug every single menu item into google translate before I could order.  Even then I was dubious about what would be arriving.

Dinner arrived and the girls quickly inhaled it before dropping off to sleep.  Ben and Rohan are watching the ‘footy’ (soccer) with great interest though.  Ben’s description of the game of soccer goes like this:  “it seems the main goal of soccer is to see which team can do the most convincing faking of injuries in order to obtain free kicks”.  My description is “there are a lot of really good looking blokes appearing very worried about a ball”.

We had a delivery arrive from our French friends (Coco and Billy) of wine, cheeses and a whole other heap of French delicacies.  I am desperate to get this blog finished so I can go join Ben on the lounge with some delicious cheeses.  I think I’m even going to have a wine.  What is it they say?  When in France…….

Tomorrow we are off to Disney Land.  I hope there aren’t too many crowds and queues as I don’t know that certain people will be able to handle it. I was certainly stretched to my upper levels of tolerance today when I was surrounded by 60000 people all wanting to look at the same thing I wanted to look at.  Poor old Isabelle didn’t see much, other than a bunch of peoples backsides. 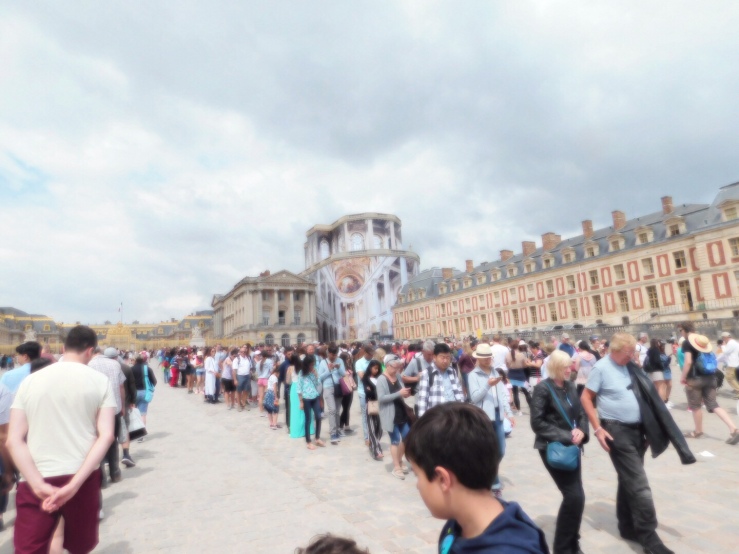 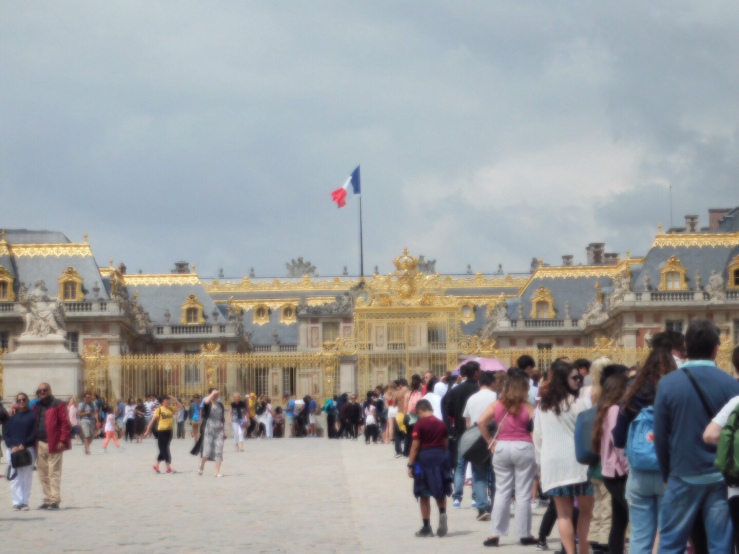 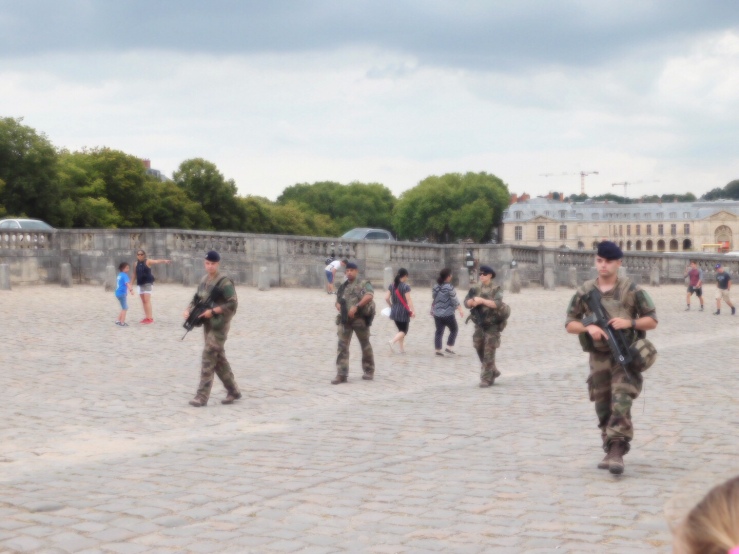 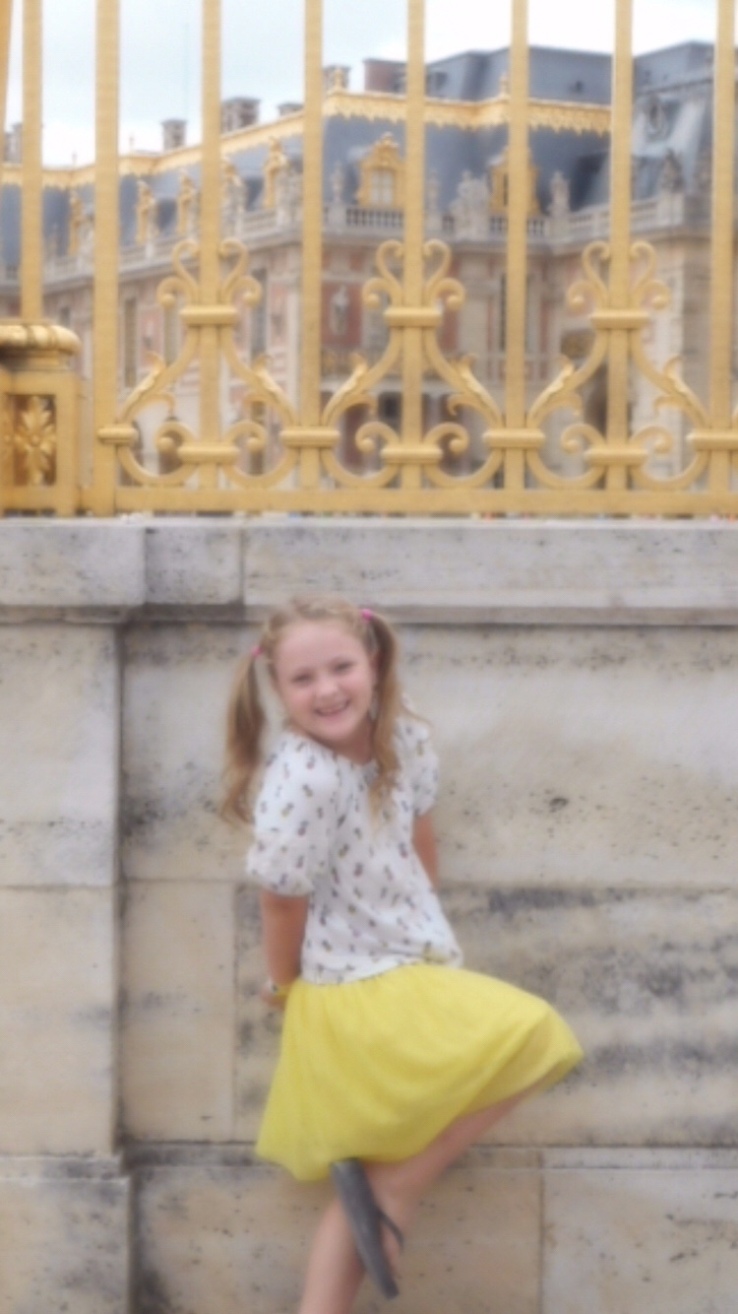 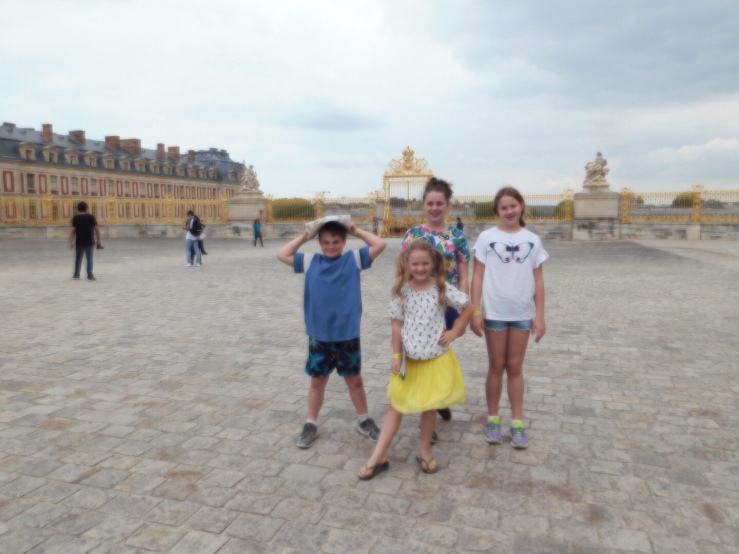 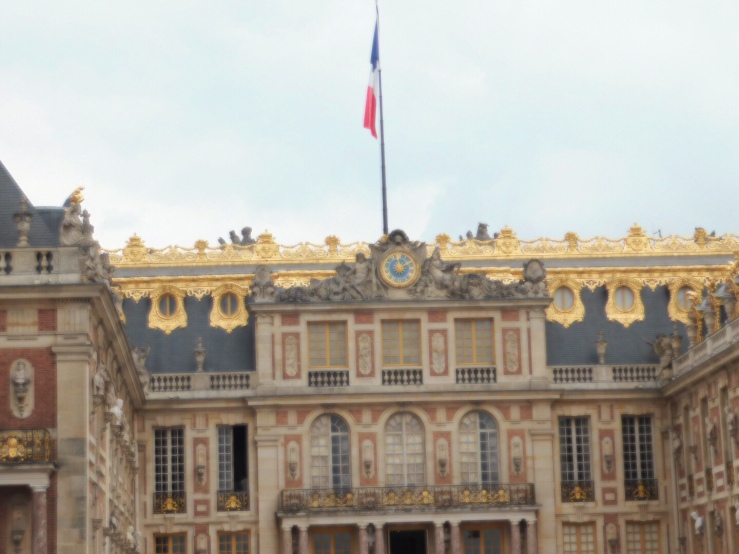 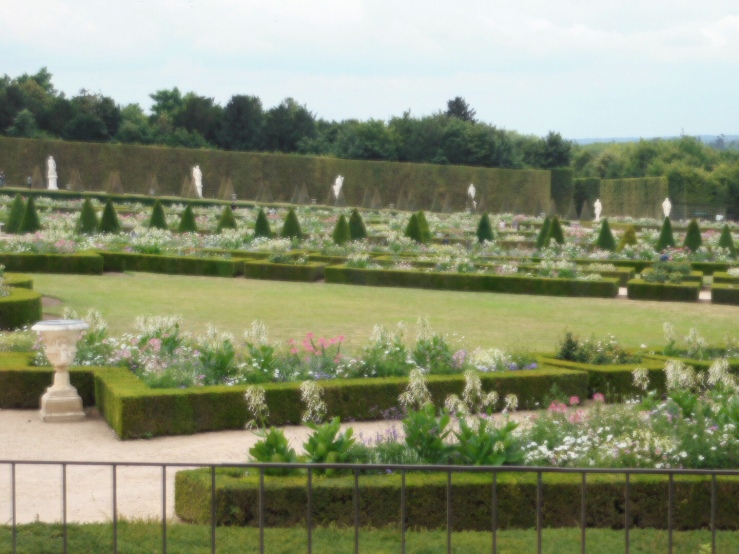 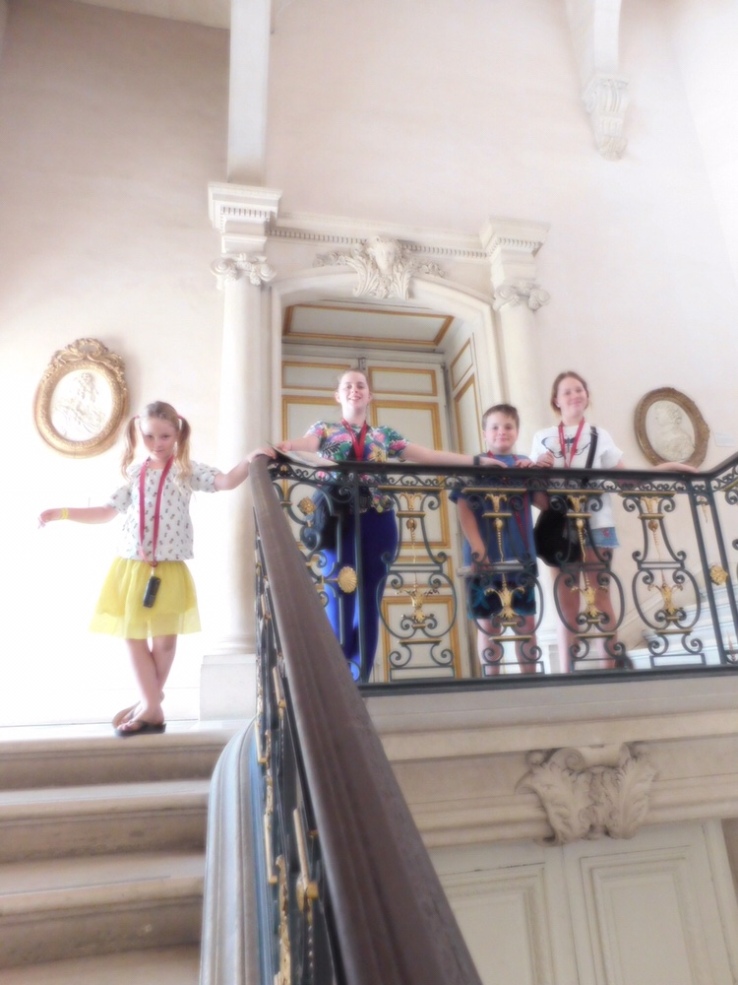 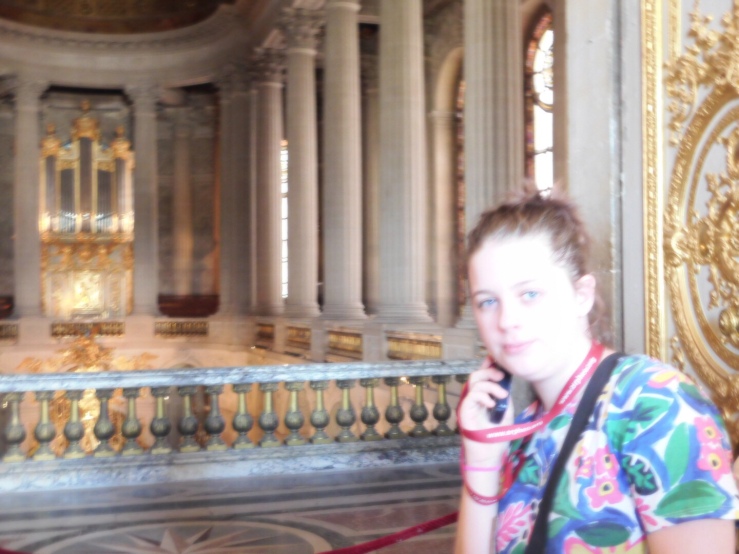 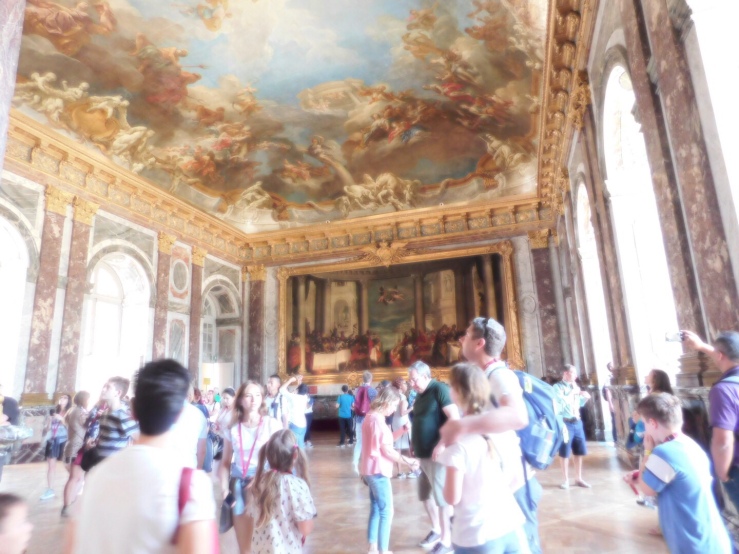 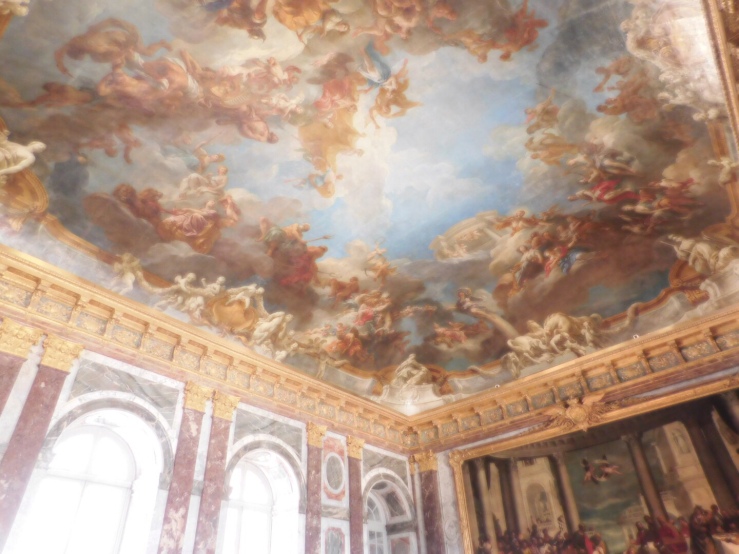 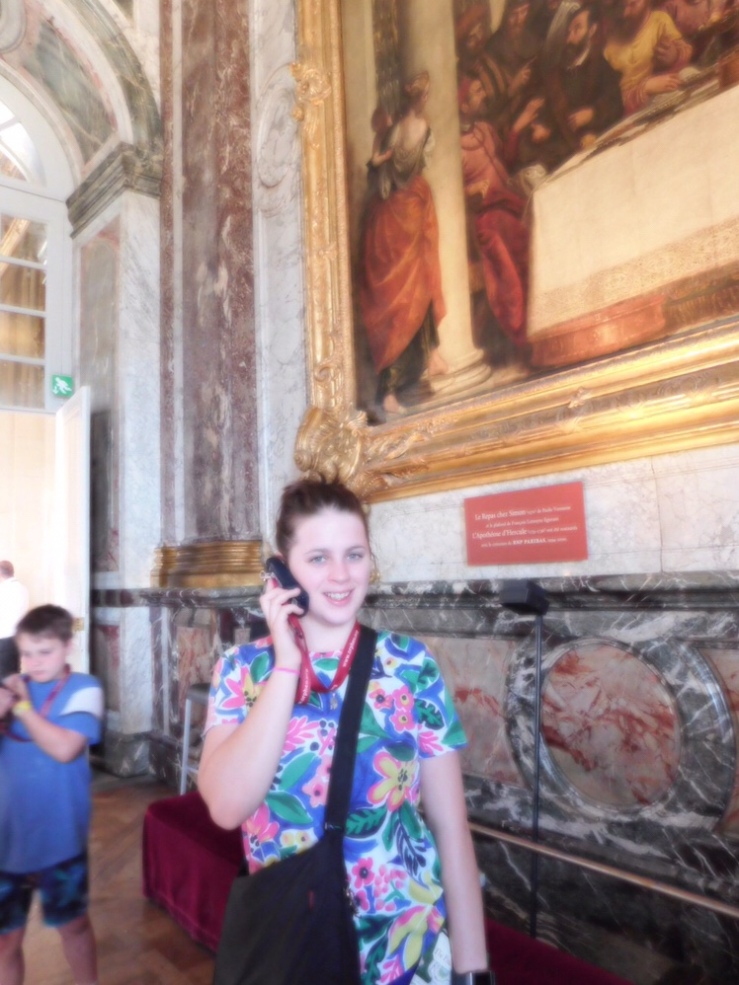 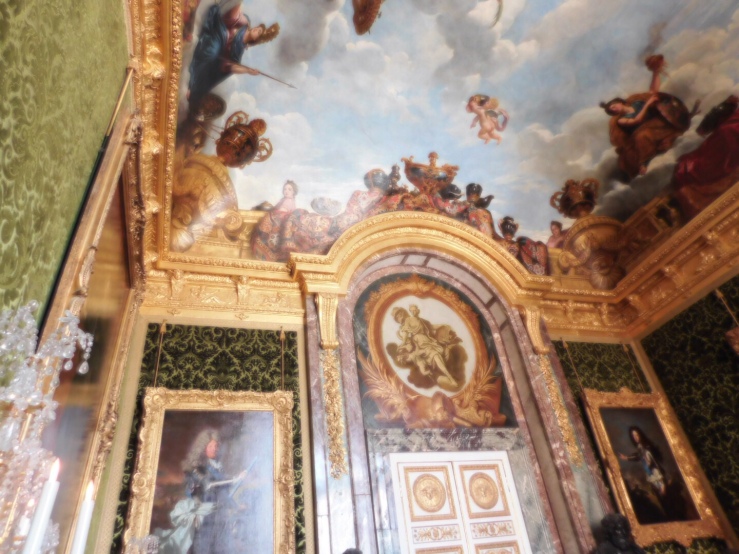 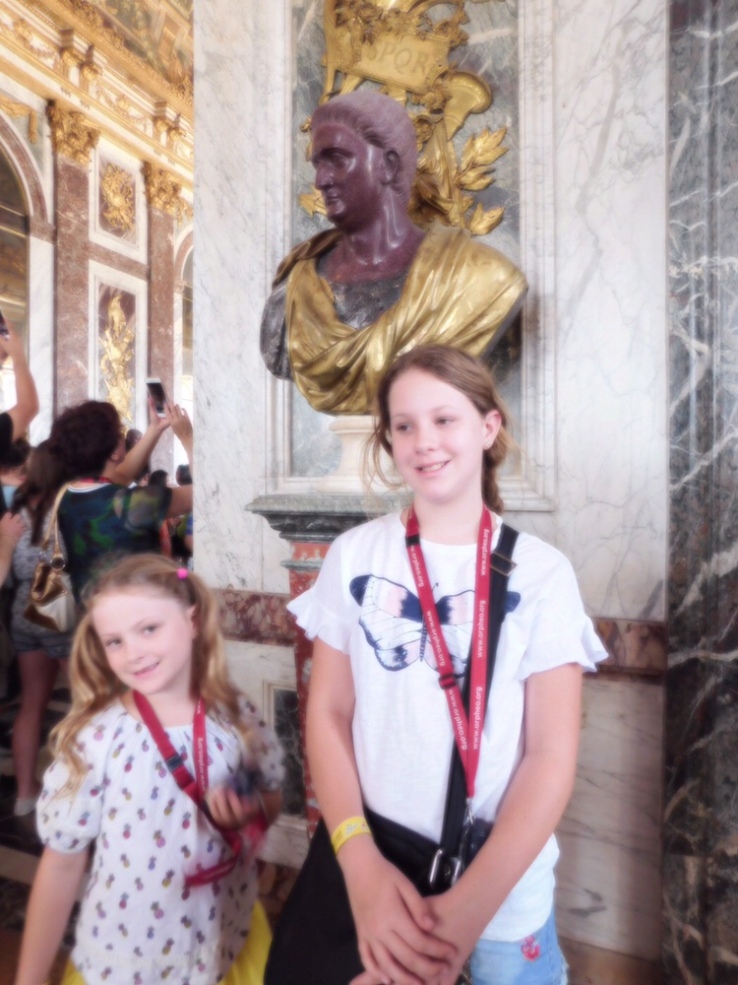