Before I start today’s blog I have 2 very important announcements.

We decided to do a bit of a road trip on our final day on our farm, Casale Fontani, just out of Roccelbegna.  The children help out around the farm in the morning for the milking of the sheep and in the afternoon for feeding the orphan lamb, herding the sheep into a different paddock and feeding the cows but during the middle of the day we leave Luciano get on with his own work.  I’m sure that the ‘help’ he receives from my children in morning and afternoon is more of a hinderance.

Luciano lives and runs the farm by himself.  His family is the animals that he lovingly cares for.  He was born on the farm that he runs and since 2015 he has been using it as an Airbnb.  The original farmhouse, which he is unsure of the age, has been extensively renovated.  Downstairs there are 4 large bedrooms, each with their own ensuite.  There is an industrial kitchen and a charming dining room which he sets beautifully for breakfast.  It is a perfect set up for those wanting to experience a unique and authentic, rural Tuscan life.

I’ve mentioned before that the nearby town, Roccalbegna, is an ancient town and is off the beaten track.  There are no major tourist attractions in Roccalbegna and it’s residents seem to have lived and worked there for many generations.  It is a stunning little town and so many fascinating places to explore and such a rich history.

Roccalbegna is in, the unfortunately named, Grosetto Province which is a host to many natural wonders and ancient delights. I’m sure this region must be overlooked as far as tourists are concerned as it is no where near as densely crowded with camera snappers and souvenir peddlers as other places we have visited.  In fact, despite visiting many villages in this region, the kids were unable to obtain a touristy keyring or a badge.  The closest we came was purchasing some local biscuits and jam.

For the daily midday exploration, Luciano suggested that we visit a beautiful nearby costal region called Maremma (origin of the Maremma dog and cow).  Maremma is the host of Parco Regionale della Maremma (what us Aussies would refer to as a national park) that has a stretch of 10km stunning beaches.  After a quick google we found out that it was somewhat a local secret. To access the national park you need to catch a bus, or have your own car and the national park only allows 180 cars into the park at any one time.  We were hopeful that we would be able to find our own secluded paradise somewhere along the 10km stretch of beaches.  To access the beaches you need to follow the signs (or put into your navigator) to Marina di Alberese.  If there are already 180 cars in the park (as there were when we arrived) you need to wait until one exits before you are allowed to enter.

We were so excited and certain of our ability to find a sequestered piece of paradise.  Unfortunately, all of those 180 cars must have been filled to capacity and an even greater number must have entered via foot, bike or bus.  The beach was a sea of umbrellas and it was difficult to find a spot anywhere.  Luckily (for me) we found a spot right near the life guard – which offered me the benefit of a natural seascape scene and a view of a well oiled, toned and shirtless Italian life guard.

I volunteered to be the “stuff minder” and set myself up on the beach with the food and my kindle.  Paradise.  Kids had an awesome time swimming in the stunning waters.  Ben said that the water was so salty that it would be impossible to drown and that you could just float easily on your back.  Hearing that it would be “almost impossible to drown” and the fact that we were parked right next to the lifeguard lulled me into a (probable) false sense of beach security as far as counting heads in the waves was concerned and allowed me to become absorbed in my book.  Ben was with them anyway….

Kylah napped on the beach next to me which resulted in incredible sunburn on the back of her legs and her back.  I was super relived that she had asked Ben to cream up her back so I was not blamed for his dodgy cream-up job.  She is okay though.  Nothing that a bit of moisturiser won’t fix.

Most of the people who were on the beach appeared to be Italians so it probably is a local hotspot on a warm and sunny Sunday.  Perhaps for a quieter time a weekday might be better.  Ben and Rohan did go for a wander up the beach to see if it was quieter elsewhere but all they found (to Ben’s delight and Rohan’s horror) were topless Italian women and the sea of beach umbrella’s that stretched as far as the eye could see.

After the beach we made our way back to Roccelbegna and watched a bit of the beer-fest, which was now in it’s 3rd day and still in full swing.  For a town of just over 1000 people they sure know how to party!!

For our last meal we invited Luciano out to a local restaurant with us and ate the most delicious meal ever.  Part of the restaurant is over 1000 years old (one of the walls) and it has been in the same family for 6 generations. Carlo, the current owner, makes the BEST gelato. I really need to go back to Roccalbegna just to have more!! I feel like everything I usually cook at home is cardboard compared to the incredible dishes we have been experiencing here. 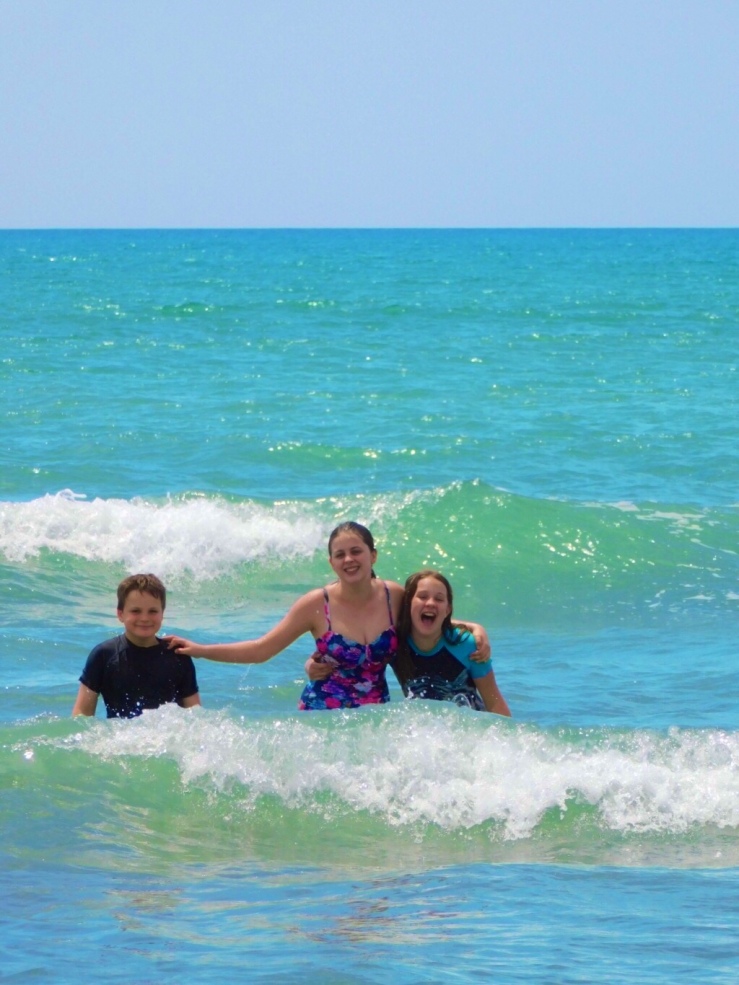 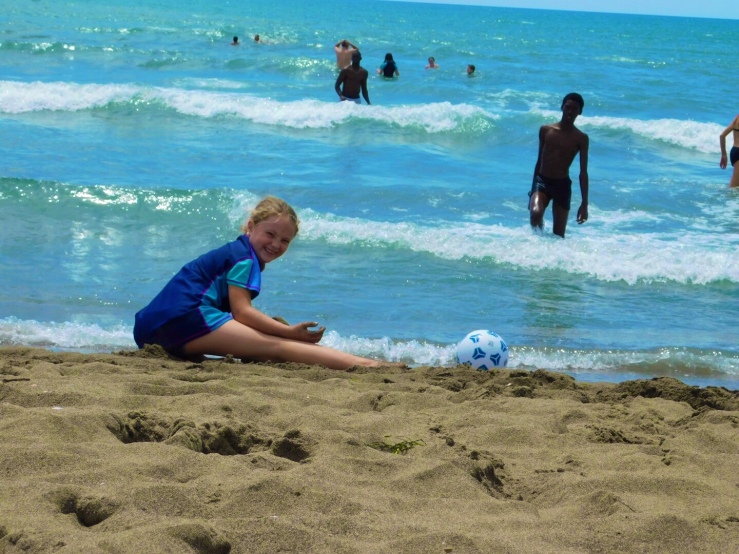 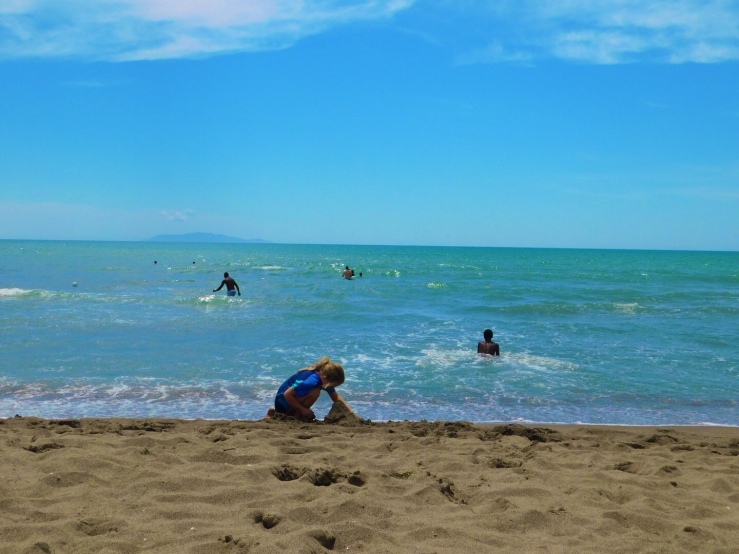 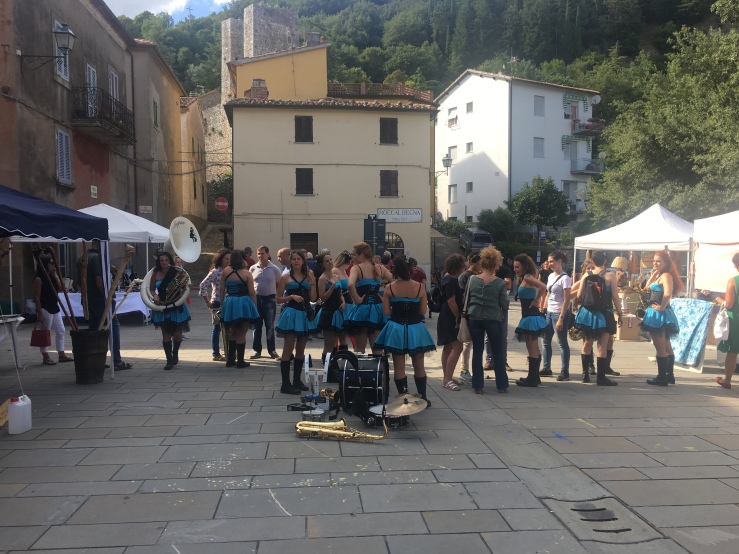