This morning we left Pomezia and while our Airbnb accomodation was nice, we were pleased to be leaving the town – whose run down appearance left a lot to be desired.  We only had a 2 hour and 40 minute drive to our castle in Silvi (near Abruzo) and I wanted to make a teeny, tiny detour, which google assured me would take 11 minutes, on the way.

You see, I think I mentioned in a previous post that in Switzerland and Germany I discovered Ovomaltine blocks of chocolate!!!! You remember those little packets of Ovaltinies you can get in Australia?  These blocks are of delicious Swiss chocolate with chunks of those inside.  I had also found, to my utter delight, packets of fun-sized Choc Ovo bars.  After sampling one, I realised that they were very similar to the old Milo bars we used to be able to buy in Aus.  You know the ones that tasted like compacted Milo powder covered in chocolate?  Don’t know why Milo ditched them – they were the best things ever.  Choc Ovo bars are just like them but a million times better and apparently – healthy!!

I’m happy to report that the blocks of Ovomaltine chocolate purchased for the purposes of souvenirs are safe and uneaten in my souvenir bag.  However, the Choc Ovo bars that I had also purchased seemed to have disappeared.  I did give the kids and Ben one to try, then I think I may or may not have eaten the rest during a midnight feast.

Devastated that I was not going to be able to bring them back to Australia for sharing with my nearest and dearest I started searching Italy for a store that sold them.  After hours of research (I seriously have issues and way too much time on my hands) I found that there was a sporting goods store just off the highway that stocked these beauties.

Apparently they are not only a delicious treat, but contain essential vitamins and minerals and at only 86 calories a bar they are practically a health food. Athletes use them for energy and as I pointed out to Ben – less calories than an apple (not sure if this is correct but it sounds good).

Ben was not happy at my plan to deviate from the selected route just for chocolate – he claimed, erroneously of course, that this was ridiculous (don’t know what’s wrong with him lately – first he tells a menstruating woman that she is a junkie for wanting nurofen for period pain, then he whines about having to drive 11 minutes out of our way to buy chocolate for her).

We then embarked in a Mexican standoff.  I said “Fine!  We won’t go. But just incase you are having issues interpreting my emotional state I’ll make it very clear – I’m angry and I think you’re a killjoy”.  Ben then said “If you don’t want to go we wont.  If you do we will.”  Which I responded with “Well, you’ve taken all the fun out of it now.  I was so excited that I didn’t have to make you go back to Switzerland or Germany to buy more and now I’m just pissed off because you’re pissed off”.  This banter continued back and forth while our children sat nervously in the back seats planning which parent they would live with after the divorce (no contest really – the parent who would drive to another country to source a chocolate bar of course!!!)

In the end we decided to make the “11 minute” deviation to the sporting store in order for me to procure my precious Choc Ovo bars.  If I am a junkie of anything, it certainly isn’t nurofen for period pain its Choc Ovo bars.  I was trying to be cheerful (even though I was still pissed off that Ben did not appreciate the fact that I had saved him a trip back to Germany or Switzerland) to placate the children who do not cope well when Ben and I have differing opinions.  Because we are both so easy going, this rarely happens so when it does the kids assume the worst.

Our quick detour off the highway didn’t go as planned however due to the Navigators failure to give clear instructions and the roads in Italy having very unclear rules.  Actually, they do have rules, Ben studied them obsessively before driving in Italy.  It’s just that no one sticks to the road rules and cars seem to go here, there and everywhere in a haphazard kind of way.  Things that would evoke road rage in Australia (i.e. someone pulling out in front of you to make a right hand turn and making you stop and wait till there is a break in the traffic for them to turn right into) doesn’t seem to bother people here.  It’s the norm.  I have no idea what zebra crossings are for in Italy.  No cars stop at them (except for Ben) unless you start walking out in front of them and even then half the time they will just screech around you on the other side of the road.  You can do this anywhere though, doesn’t have to be a zebra crossing.

The Ancient Romans are credited with developing sensible and orderly road systems. I can only assume that they must have missed a spot when coming up with their roads because the 2km from the highway to the sporting good shop that sold Choc Ovo bars took us an HOUR!!!!  This is because none of the directions made any sense.  We ended up going on two toll roads and having to pay for two tolls and drove around and around in circles until we eventually found it.  There was certainly some extra loud breathing and huffing going on from Ben while I was trying to be extra helpful by giving him confusing directions such as “turn right” when really I mean left (i.e. across the traffic).

A number of times I told him to “just forget it!!” but by that stage we were too invested and Ben didn’t want to have to put up with a shitty Bianca or be talked in to returning to Switzerland or Germany.

Finally at our destination I delighted in buying 6 packets of 6 bars.  As a ‘thank you’ to Ben and the kids, I opened one precious packet and allowed them to have one.  I now have 30 packed away in the Souvenir bag and am trying to decide who I like enough to give one to and how many I will keep for myself.  I haven’t ruled out buying more, should the opportunity arise, and am even considering importing them.  I may become a millionaire from doing so.

After everyone had eaten their Ovo bar (which I declared was lunch for the day) we continued on to our castle in Silvi. Kids and Ben have been listening to the podcast ‘Teachers Pet’ while driving and I am usually typing on my computer or snoozing, having already listened to all the podcasts.

Arriving at our castle was the best part of this entire trip.  There is a plaque out the front of the castle that reads “built by Giovanni Battisa Martinetti in Silvi, MCCCCXL AD”. The sign is written in Latin but that is the English translation.  For those of you who forget your latin numbers I think (if my memory of year 7 maths serves me correctly) that it was erected in 1490 AD.  Since then it has been passed down through the sons of the Martinetti family until it was gifted to a third born daughter of a direct descendant who has maintained the beautiful property ever since.  She uses it as an Airbnb, but people can also have weddings, parties and other cultural events here.  It is by far the most special place I have ever had the honour of sleeping in.

We have the entire castle to ourselves and the kids are spread out over the 5 floors with good old Rowie sleeping up in the tower.  I just hope to goodness that he doesn’t break a leg trying to climb down the ladder to go to the toilet during the night.

The castle is furnished in antique furniture leaving me to feel like I have died and gone to Medieval Heaven (except without all that bloodthirsty stuff). It has views of the sea and the town of Silvi and also over an olive grove, which hosts trees that were planted by the family more than 200 years ago.

Rather than heading out sightseeing for the afternoon or going to the beach, everyone decided that they just wanted to chill in the castle.  I lazily read my kindle on my antique bed and drifted off to have the most perfect nap.

Ben and I went shopping together for dinner supplies and he realised how difficult it is to shop in a different language.  I told him he could choose stuff for dinner and breakfast while I got essentials such as nurofen (for the junkies in the family who can’t handle a bit of period pain) and insect repellent (I had heard a rumour that there may be mozzies and while I haven’t sighted one yet I refuse to take any chances).  Thankfully there were no Choc Ovo bars in the store which would have rendered our entire morning a complete waste of time.

Ben chose frozen spaghetti bol and over dinner (which btw was delicious) we all talked about tomorrows plans.  The local area has SO much to see that we don’t know where to start.  Some of us want to go to the beach, others want to look at museums, churches, antiques and architecture (me), some want to discover the nature parks and others just want to laze around our castle.  I’m happy with either idea 2 or 4 but will begrudgingly go along with whatever since I wasted hours of everyones time hunting around for chocolate bars in a sports shop.

I will attach some photos to make you all madly jealous.  Just so you know though – the pictures do NOT do justice to this amazing place so you probably won’t be as jealous as you would have been if I bothered taking better pictures and then adding flattering filters.  See, I’m doing you all a favour.

Remembering that my one of the things on my list of ’40 things to do before I’m 40′ is to become a successful travel blogger, I may bequeath an Ovo bar to the person who gets me the most followers. 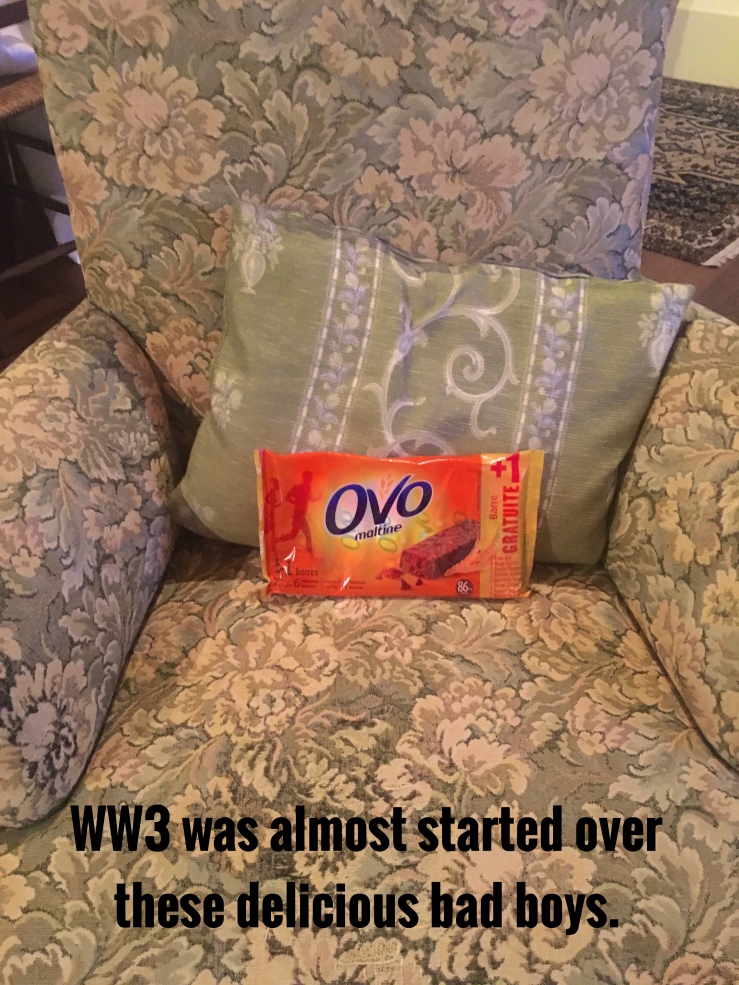 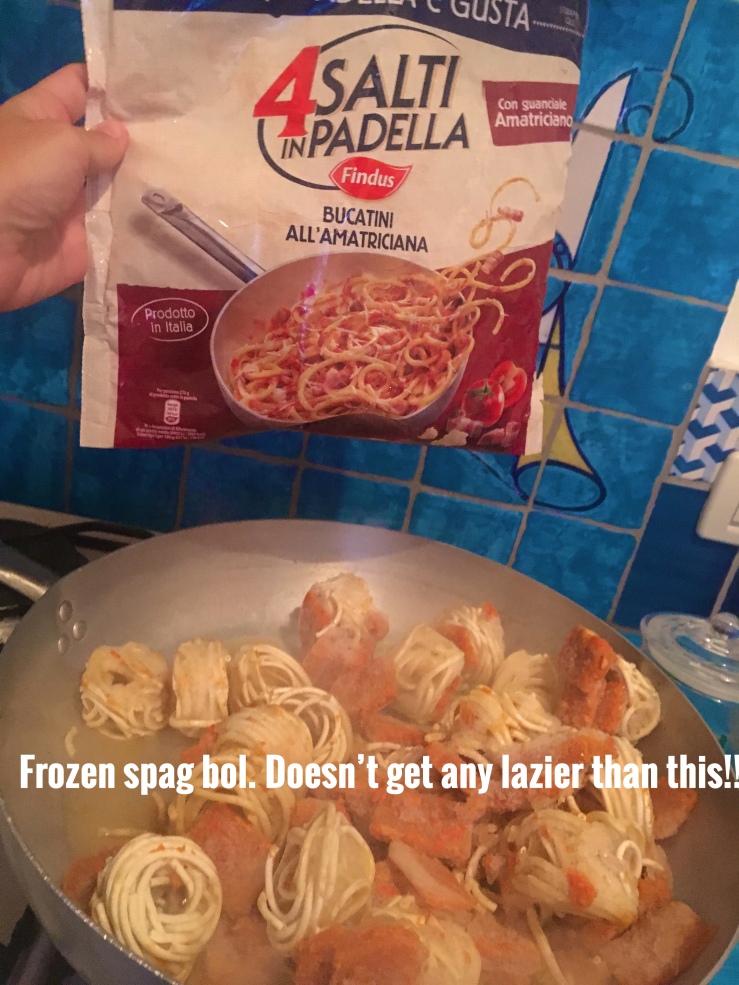 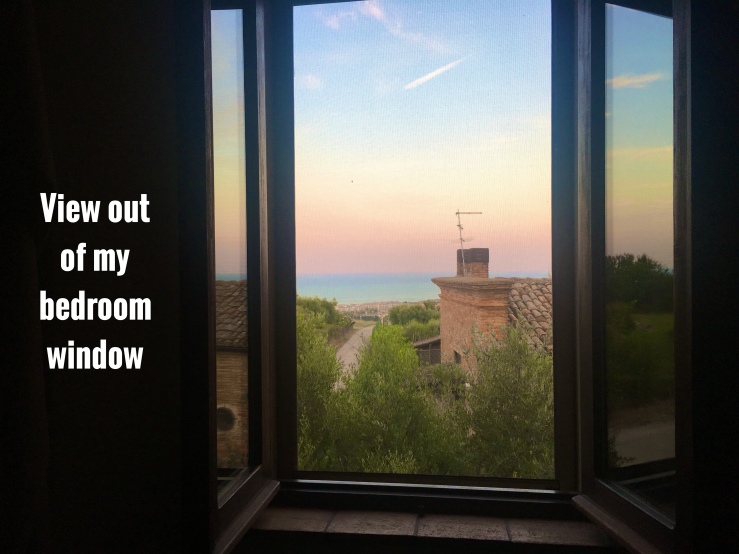 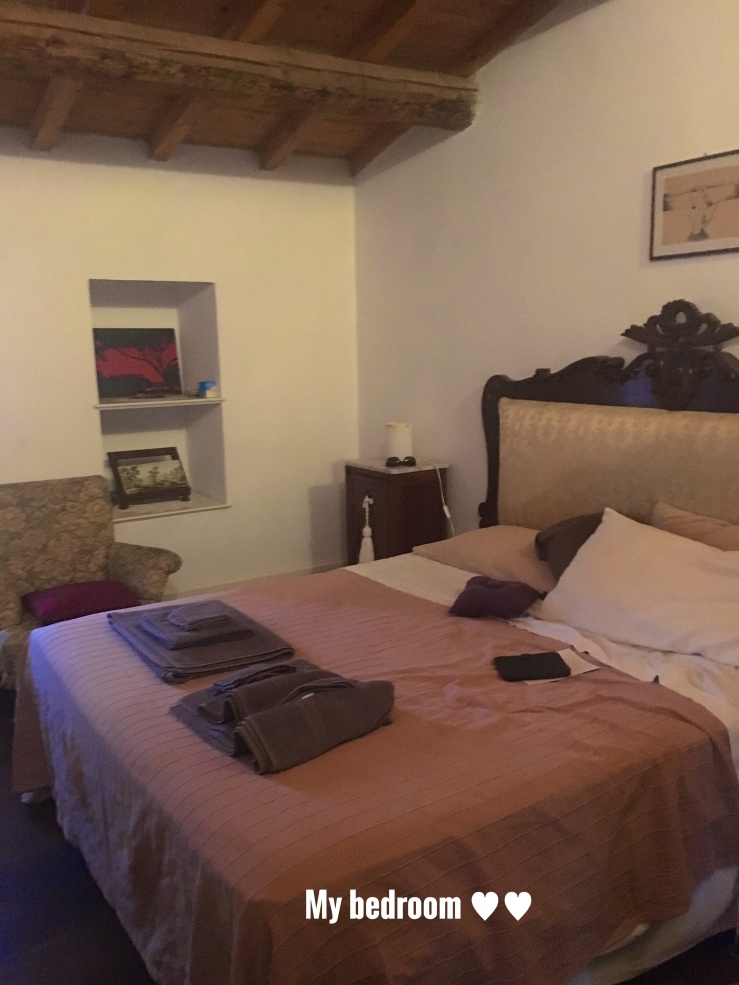 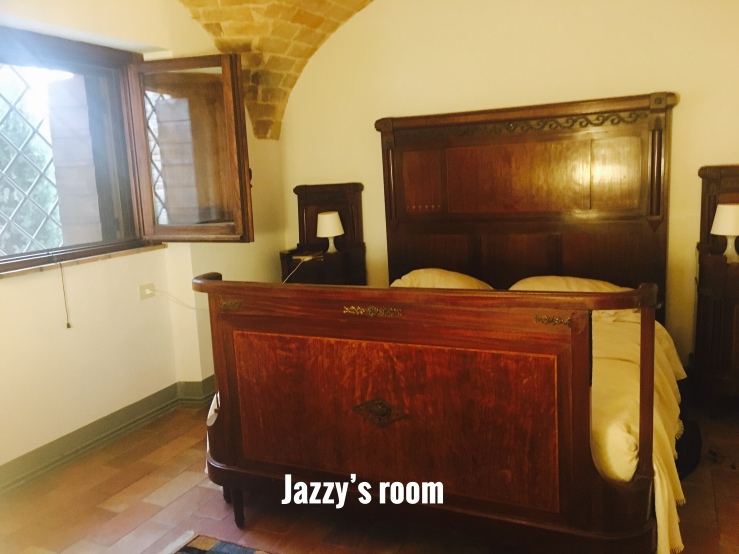 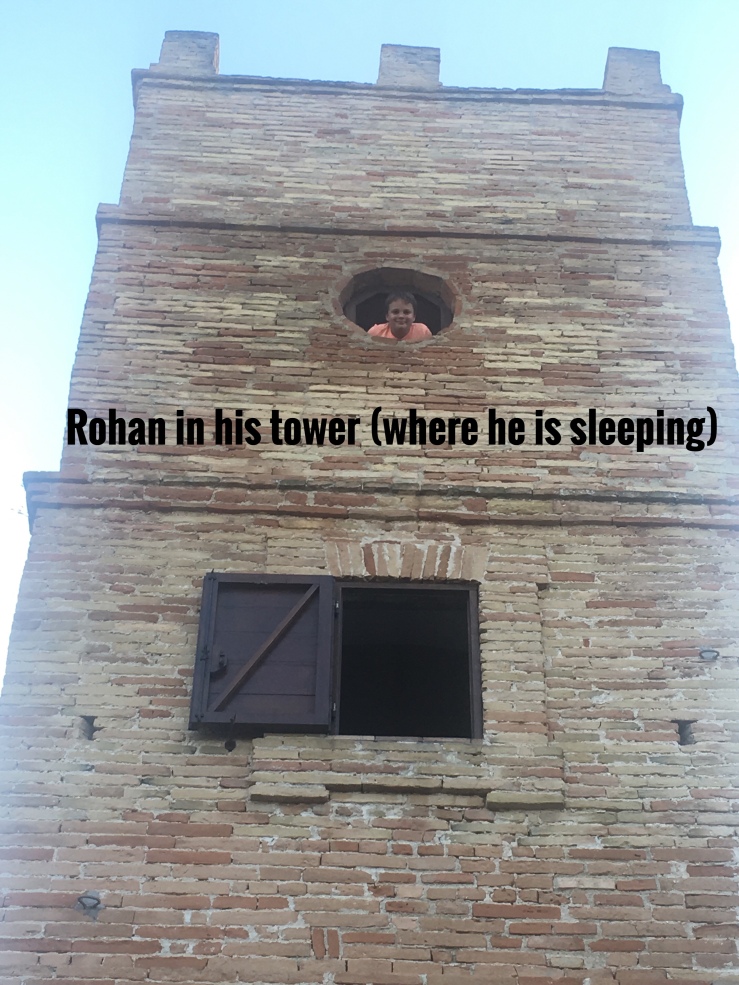 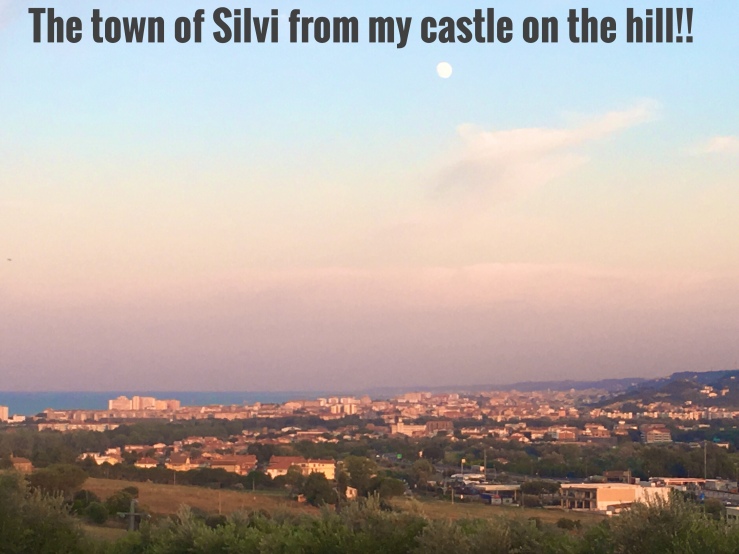 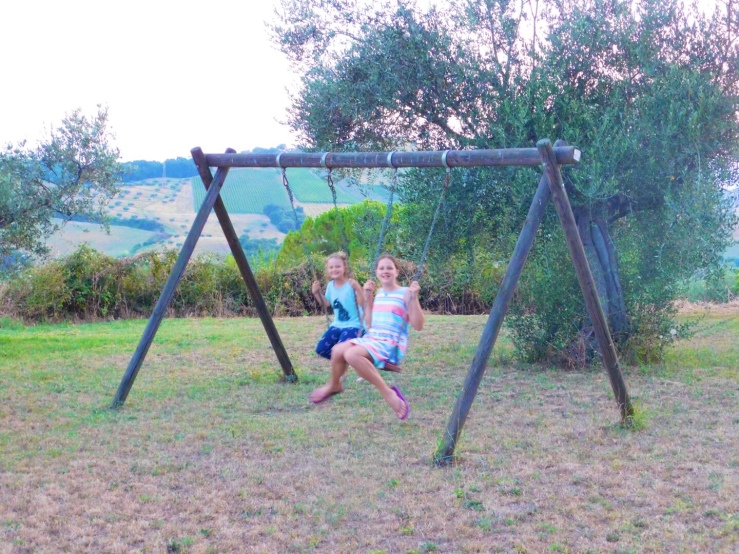 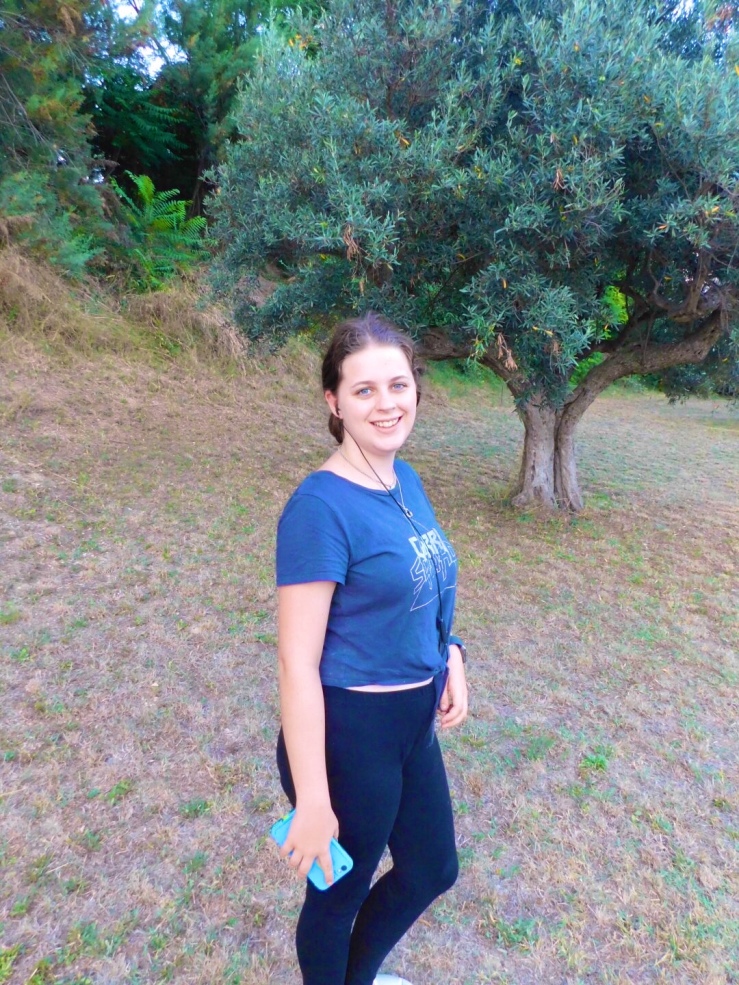 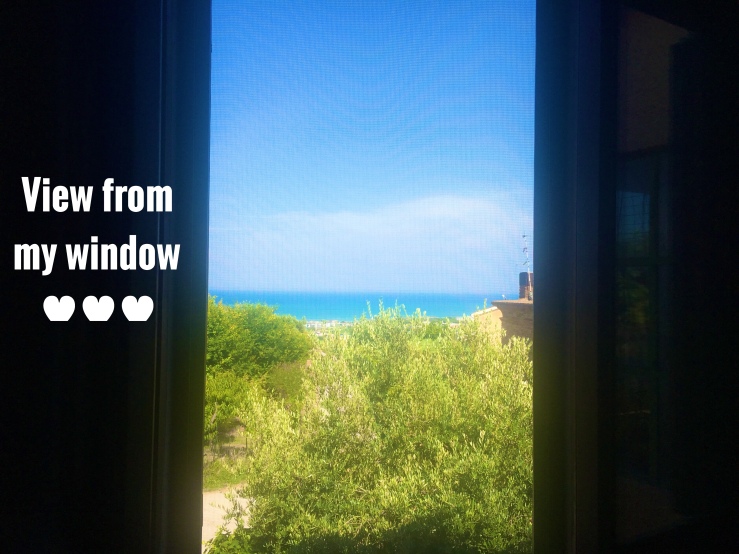