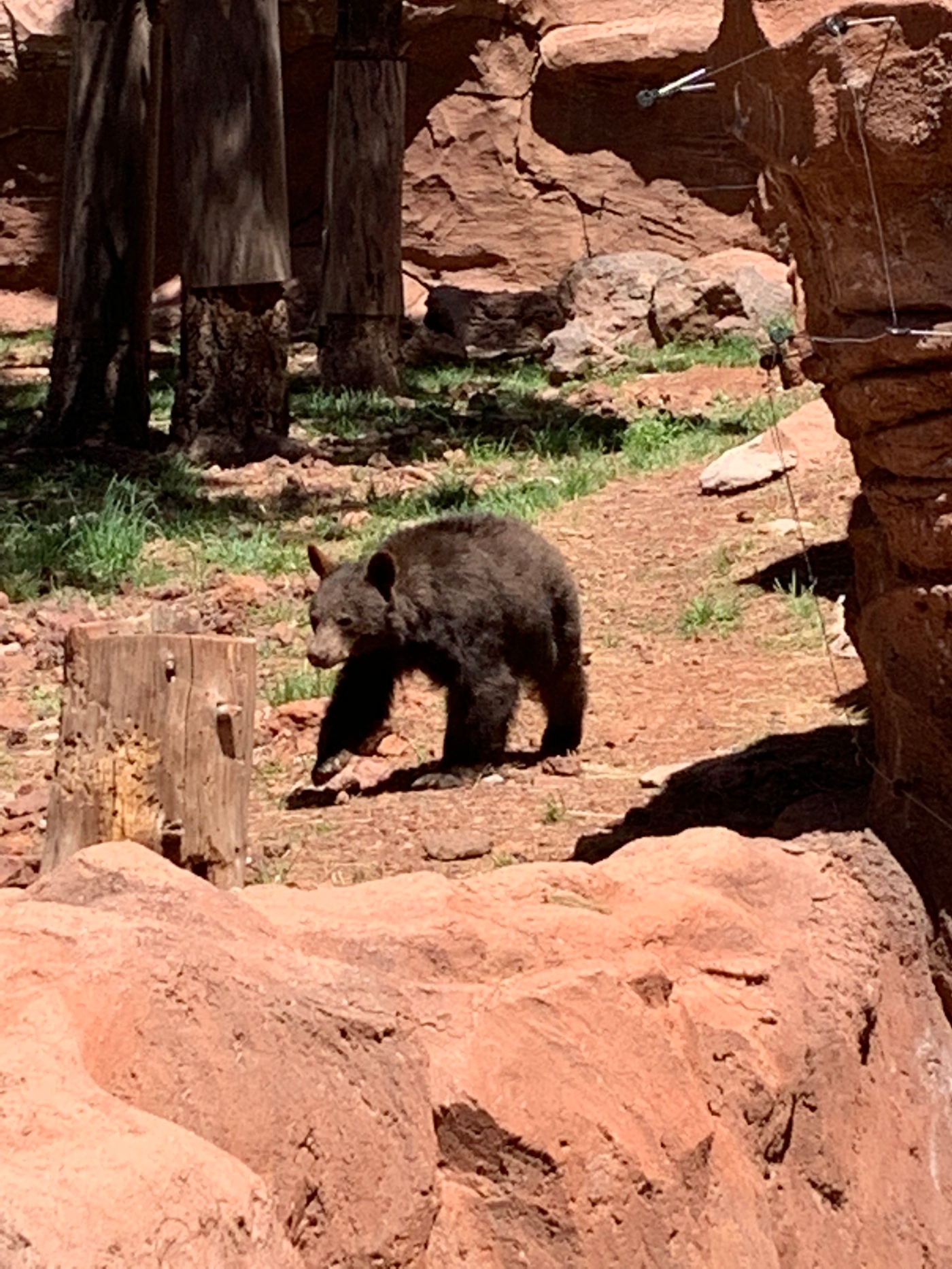 I would have been absolutely devastated to leave the Grand Canyon had it not been for the one slither of excitement that was awaiting me after our departure. Bearizona. One hour outside the Grand Canyon is a drive through park where you can see REAL LIVE BEARS coming up to your car!!!

I’ve never seen a bear before, with the exception of a Koala Bear (which technically isn’t a bear at all) so I was thrilled!! The only thing that marred my intense elation was the knowledge that my son Rohan would have been even more excited than I was to be in Bearizona. I promised myself that one day I would definitely bring him back.

Driving in to Bearizona we were told the fees were $25 an adult and $15 for children under 12. After some pressing the lady said that that can do a per car fee for $120. Much less than what we would have had to pay had we not questioned her and simply paid what she had told us. This is useful information to know and not readily volunteered.

Our first drive around the park was super boring. There was a section with deer in (I had just seen wild deer at the National Park), fancy cows and sheep, sleeping wolves and sleeping bears. Closest I got to a bear was a view of one’s arse 150m in the distance. You aren’t allowed to wind down your windows and you are supposed to have your doors locked but I couldn’t see why. For all I knew they were stuffed bears and wolves, certainly no threat to me or my children. Of course I broke all the rules. I wound down my window to take a pic of the bear’s bum and stopped even though the sign said you weren’t allowed to stop driving and your vehicle must remain in motion. It is really hard to get a picture of a bears bum 150m in the distance in a moving vehicle. I had no choice. This was a $120 picture!!

As we drove out of the zoo, feeling let down, we spoke to the lady about the inactivity of the animals. She informed us that they feed the animals at lunch time and that it is then that they are most active. We were told to go wander through the attached ‘traditional zoo (where animals are in enclosures) and view the souvenir shop then do a second drive around the park just as they are being fed.

The traditional zoo was quite good!! I got to see little bears really close and lots of other animals that I didn’t even know existed!! An example being a javelina. It looks like a pig but is definitely NOT in the pig family (so say’s the sign). I guess it is what I imagine the offspring of a pig and a rodent would look like, if they were able to reproduce.

I spent over an hour in the gift shop, picking out presents for Rohan, and then we had the traditional/staple American lunch – hotdogs. I’m so over hotdogs and I’ve only eaten 1 of them this entire trip – in Central Park. I’m over smelling them and I’m over them being one of the few items on offer at any food stand. I erroneously ordered cheesy fries, which came out as soggy bits of fried potato sticks covered in orange goop. It takes me so long to learn from my mistakes!! I keep thinking ‘next time will be different’. It never is. The cheese is always bright orange and from a can. The other weird thing is that fish is never an option on the menu, but the fries here always taste like they’ve been cooked with fish. Jenny said perhaps it’s old oil??

The second drive around didn’t disappoint. The bears and wolves were active and we saw them up close. One car had a bear following it around sniffing it’s tail. I said to the group “I bet they smeared some raw meet on their tow bar!!”. Genius idea really. Next time I go I am totally smearing raw meat on my window so the bears will come up and lick the window. How good would a selfie of me kissing a bear through a window be??? The wolves were active and looked to me like giant puppies. I totally wanted to jump out of the car and pet them. Are they really that dangerous?? I may or may not have wound down my window a fraction to simulate a howl in order to get the attention of a wolf for a good pic. If I did (and I’m not saying I did) it was met with horrified screams from the rule loving children in my car. I do have some great photos.

We left Bearizona and started on our journey to Las Vegas. It was supposed to be a 3 or 4 hour drive and had us arriving at our destination – MGM Grand, at about 6pm. Most of the trip was uneventful. Kids slept and grownups and I listened to podcasts.

The last hour of our trip however was the most terrifying hour of my life. Despite buying a new GPS navigator (American Airlines smashed my old one) and updating the latest maps just one week ago, it seems that Garmin has no idea about the layout of Las Vegas roads. In fact, I’m pretty sure the Las Vegas road authority has no idea about the layout of the roads. There are lanes everywhere, entrances and exits every 100m, some blocked off with temporary fencing, some bending around and going back over the highway. We had no idea where we were going and people in Las Vegas drive like crazy people, zipping in and out of lanes with absolutely no regard what so ever to the stressed tourists who have no idea where they are going or what proper road etiquette is in Nevada. We ended up driving around in a circle 3 times before finally ending up right on Los Angles Strip in amongst a HUGE traffic jam. There were cars and people everywhere and no real sign that anyone knew, appreciated or adhered to regular road rules. I could feel my heart beating in my chest and was absolutely terrified.

We managed to find the MGM Grand, but could not locate how to drive in to it. Eventually we decided to give up and head to the airport to return the car, then taxi it back to MGM. The airport was only 2km away but took 30 minutes of sheer terror to get to. I swear that it is worse than any scary ride at Disneyland or Universal Studios. Kids entertained themselves by counting how many naked women they had seen on the side of cars carrying billboards, I entertained myself by watching in horror the aftermath of a 4 car pile up that happened on the opposite side of the road to us – right in front of the entrance to the MGM Grand. Thank goodness we gave up when we did!!

My stress levels on arrival at the Avis car return company were through the roof, although I was mighty chuffed that no one had died and the car remained in one piece for the duration of our 874 mile journey. In all the drama of being lost in a maze of hwy’s and jammed strip roads we had forgotten to fuel up. Never mind though, Avis only charges TEN DOLLARS A GALLON to refuel for you!! The van had 3/4 of a tank and so for the 1/4 that was missing, we were charged $75 USD. I was too over it to complain too much or go back out into the mayhem to find a petrol station.

By the time we checked in to our hotel it was late. I want to say 8pm but can’t be entirely sure. I had made big plans in the car. I was going to have a gamble in the Casino that evening (despite hating gambling) and a few vodkas to celebrate the end of the road trip. Instead I sat in my room, stunned and suffering from PTSD. It took every ounce of energy in my body to remain cool, calm and unaffected by the automotive mayhem that happened around me and I think once in the hotel room my body just shut down.

I couldn’t even get dinner for the kids. We did briefly look at room service but it was hideously expensive. On top of the greatly inflated prices they charge US $8.50 per person to deliver food!!! That isn’t even including a tip! I apologised to my children and told them to eat chocolate for dinner.

The room at the MGM grand has a view of the strip, which is quite nice. My only gripe was that one of the beds had dirty linen on it and the bar fridge is locked. You can have it unlocked but it costs you FIFTY DOLLARS if you want to put any of your own food or drinks in it. Never mind the cost of the items in it!! Also, despite not offering breakfast or any other service, it was costing me $100 extra a night to have 2 extra children in my room. So you can have the exact same room as I have for $100 less and the only thing I can possibly imagine that would make that difference is the extra towels they would use. Two people in two double beds or 4 people in two double beds.

To their credit MGM was extremely apologetic when I expressed my feedback (I.e lost my shit) and they offered to make it up to me in a number of ways, which I really appreciated.

To be honest if I came to Vegas again I would not book my accomodation until the day of arrival. I paid about $450 AUD per night for my room and if I had of booked it yesterday, I could have had the same room for $100 AUD and been given a $65 per day food and drink voucher. Unless there is some huge event, I think the chances of Vegas running out of rooms is slim to none. MGM alone has 5000 rooms.

My Uber driver today told me that the best hotel for families is the Ellis Hotel, which is one street back from the strip. He said it has just been refurbished and is really nice and reasonably priced.

Many more stories on Vegas to come tomorrow but for now I’m about to go down and enjoy my free buffet. 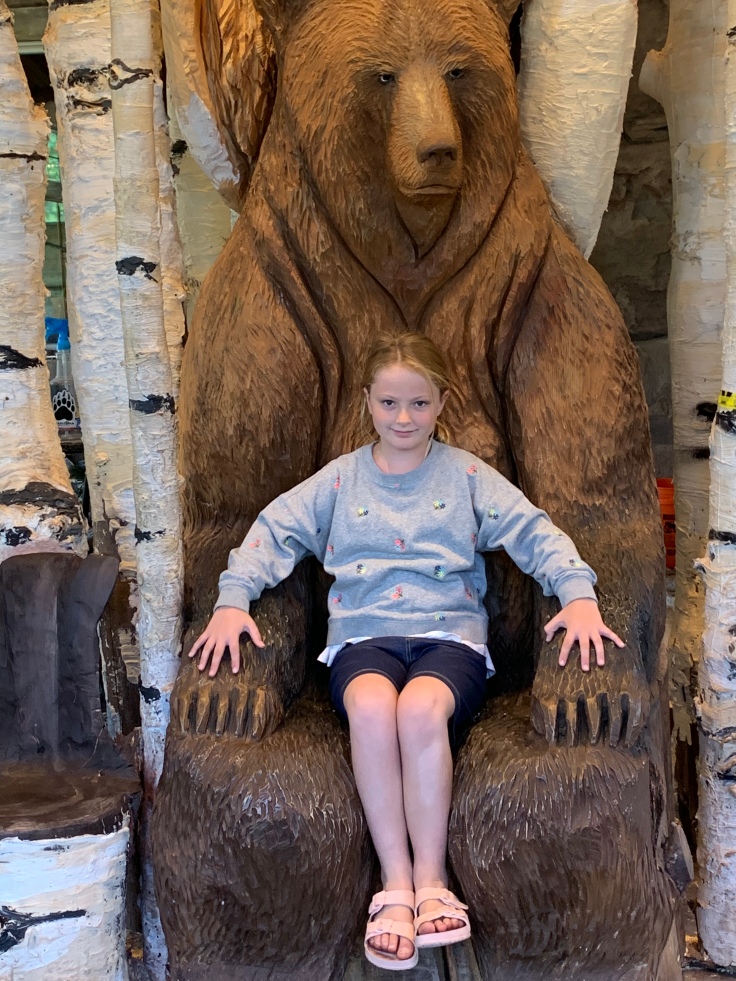 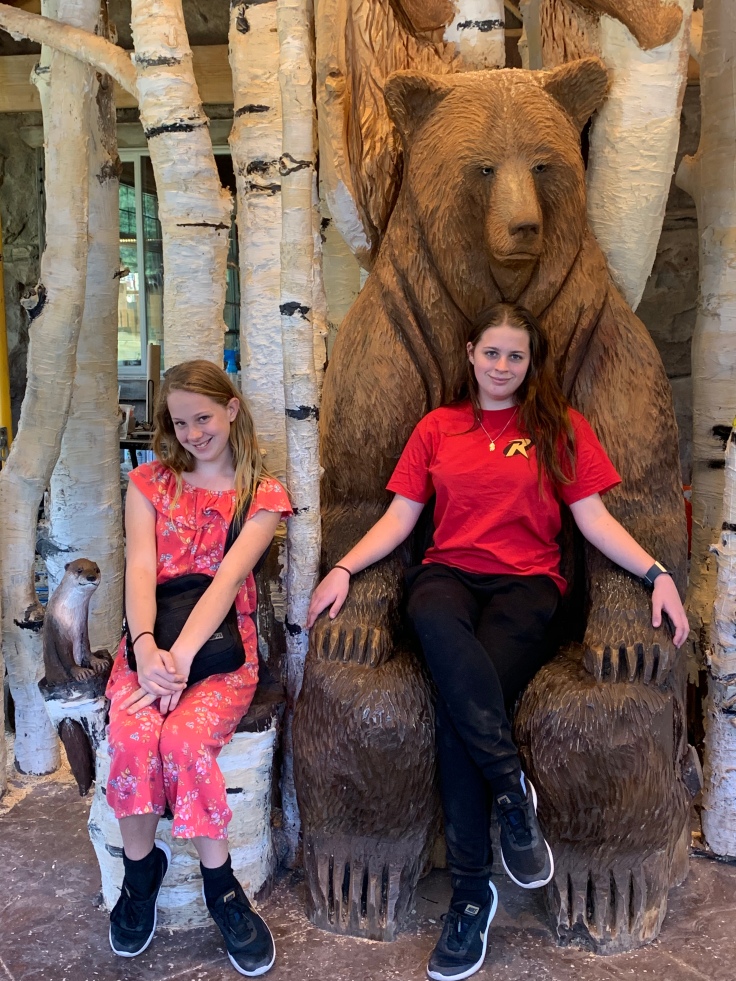 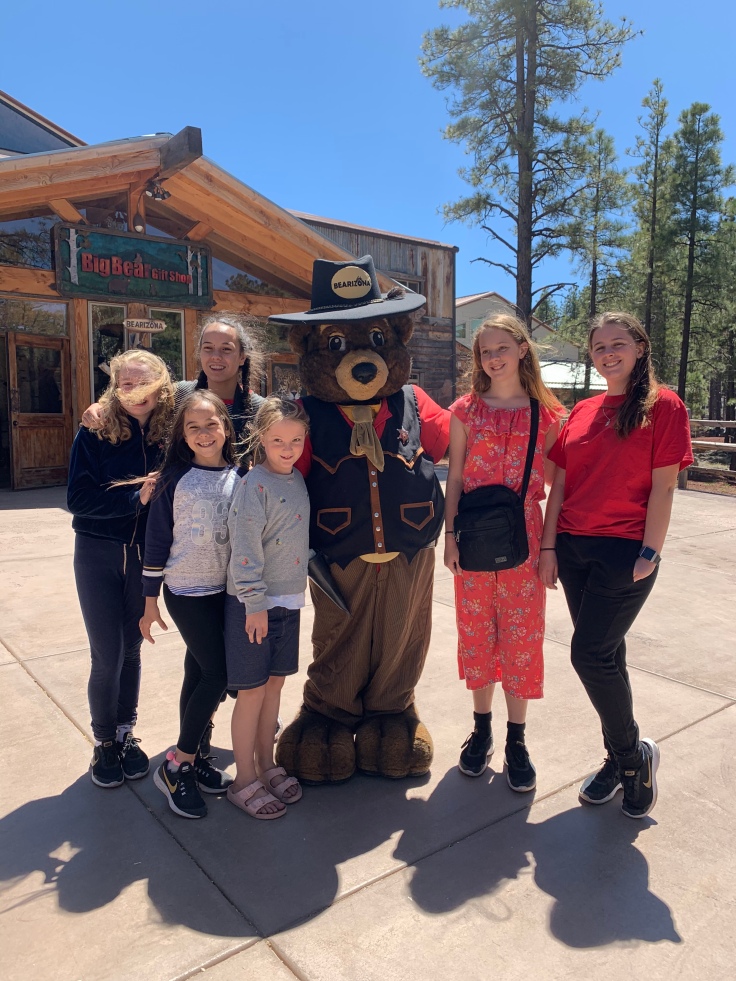 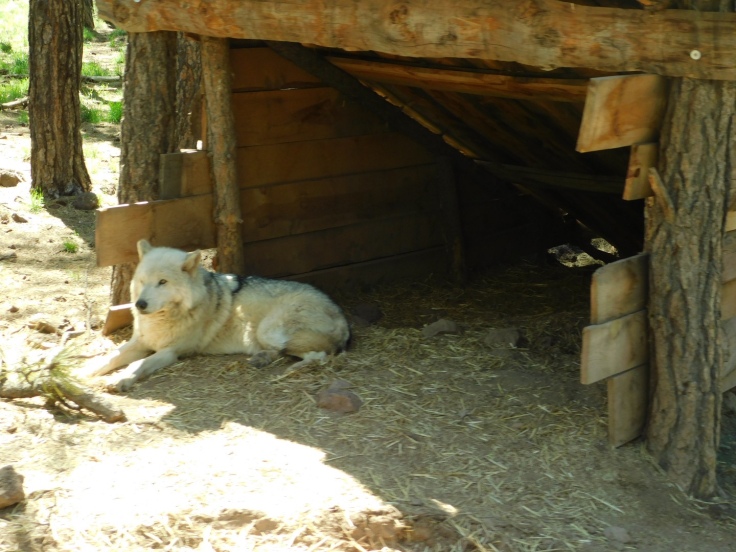 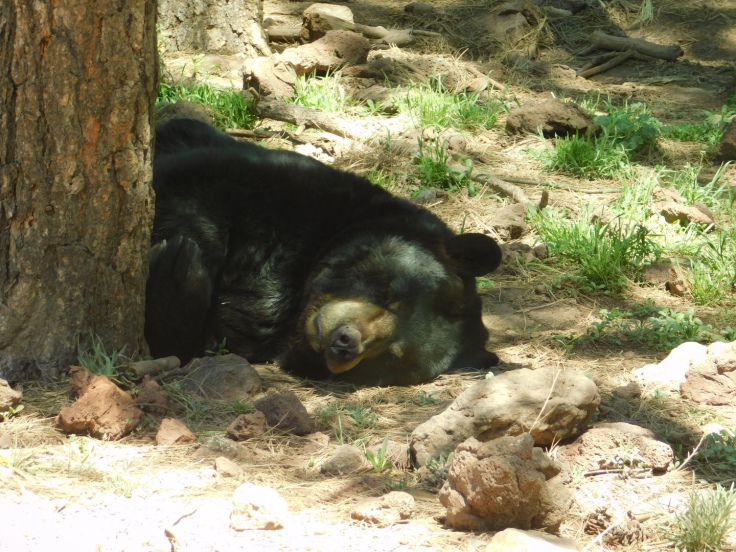 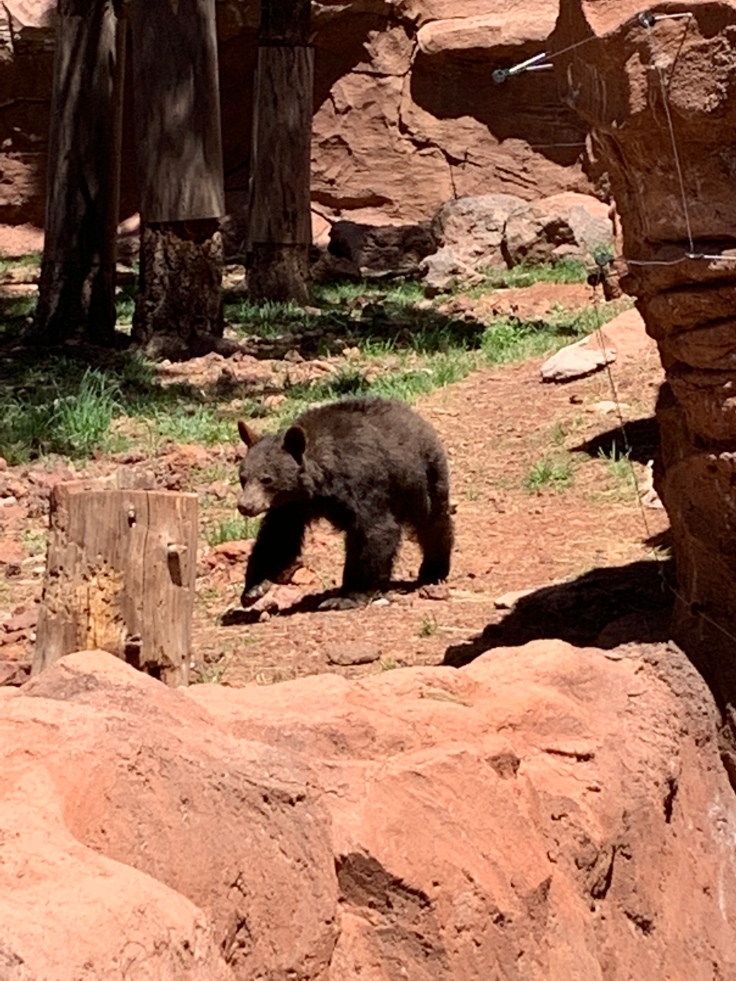 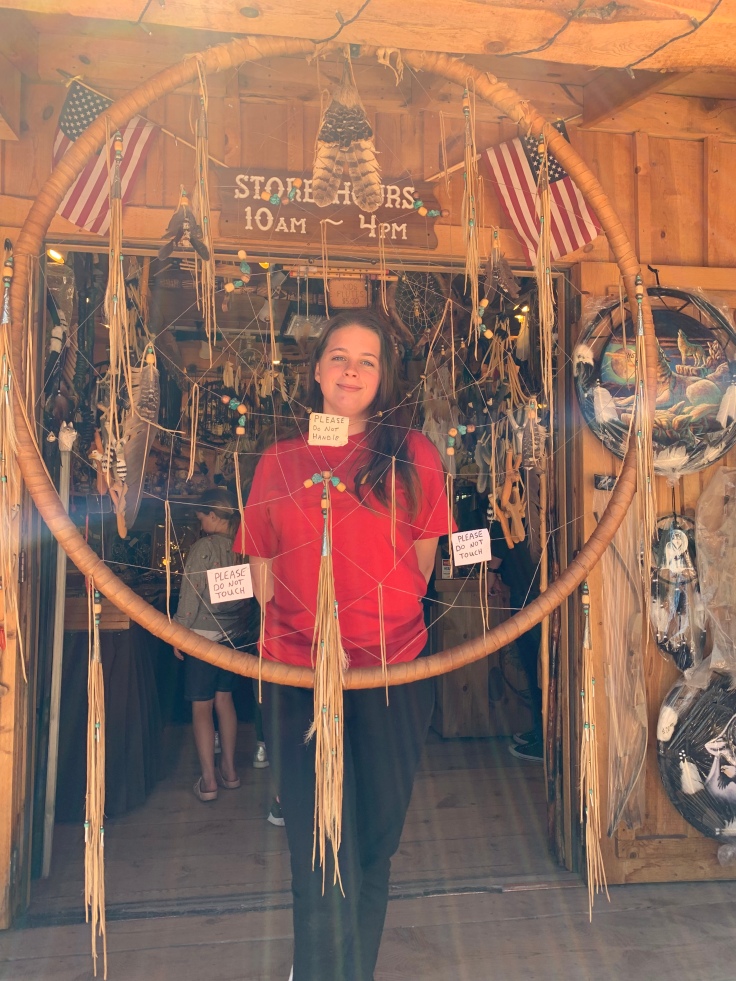